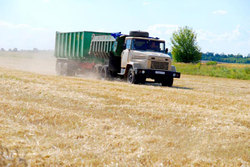 Ukraine has ditched proposals to allow foreigners to buy up its farmland in a privatisation process, to prevent wealthy multinationals snapping up its farmland on the cheap.

Mykola Prysyazhnyuk, the Ukrainian farm minister, confirmed plans next year to lift a ban on the sale of farmland which has been in place since 1996.

However, "at the first stage, we will only be introducing the land market for Ukrainian nationals", Mr Prysyazhnyuk told the RIA Novosti news agency, saying such curbs would prevent the mass acquisition of Ukrainian land by foreign companies.

"We understand that if we make the market free, then $30bn will be enough - and that's not a lot for world financial corporations - to buy up all of our land," he said.

Yulia Tymoshenko, the former Russian prime minister, has estimated the cost of Ukrainian farmland at $400bn.

The limitation and dashes hopes raised early this year by Mykola Azarov, Ukraine's prime minister, that foreigners might be allowed investment opportunities, to encourage the investment needed to realise the country's agricultural potential.

Volodymyr Lytvyn, the chairman of Ukraine's parliament, held out the prospect of foreigners being banned from buying farmland only for an intermediary period, until local prices catch up with those abroad.

"The period of time should be designated when foreigners are prohibited from buying land," he said.

"There should be a transition period until the level of land prices in this country is equal to the land price in European countries."

However, foreign ownership of land has become increasingly controversial, not only in Ukraine, where politicians only narrowly in March passed the privatisation plans, but abroad too.

A report from Oxfam, the anti-hunger charity, on Tuesday accused investors of "acquiring land in much larger quantities than they could possibly use", potentially just to tap into potential capital gains and exploit favourable borrowing conditions.

"The most comprehensive research to date suggests that 80% of projects reported in the media are undeveloped, and only 20% had begun actual farming," Oxfam said.

A conference in the UK-based Institute of Development Studies in April heard of growing evidence that foreign land investments in poor countries have failed to deliver on promises of benefits such as jobs and community development.

Ukraine is viewed as, potentially, a particularly attractive destination for agricultural investment, possessing rich farmland which once earned it the title of "breadbasket of the Soviet Union", reportedly responsible for one-quarter of the bloc's food production.

Agriculture companies, such as London-listed Landkom International, which have built up significant land holdings have done so through leases.