‘Only the big fish will survive' 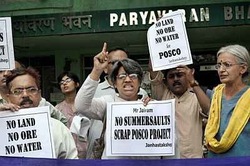 Activists of Janhastakshep protesting against land acquisition for the POSCO project, outside Paryavaran Bhavan in New Delhi on May 18. (Photo: SUBHAV SHUKLA/PTI)

P.V. RAJAGOPAL and Ekta Parishad, the non-governmental organisation he leads, have been championing the cause of land and forest rights of tribal and Dalit communities over the past two decades. The organisation is committed to non-violent, Gandhian forms of struggle and has recorded a number of success stories in ensuring and legitimising the land rights of deprived people, particularly in Madhya Pradesh, Chhattisgarh, Jharkhand, Bihar and Orissa.

In this interview to Frontline, Rajagopal points outs that the task of completing land reforms in India can be addressed only if the government is ready to implement the suggestions formulated by the various expert committees that have examined the issue over the last 20 years. He also points out that the so-called initiatives to bring in fresh legislation for land acquisition are all aimed at facilitating greater corporate control over vast tracts of land, particularly agricultural and forest land.

The issue of land reforms and land acquisition has once again come to the fore. Ekta Parishad and you personally have been involved in addressing land rights issues for many years. How do you assess the current developments? 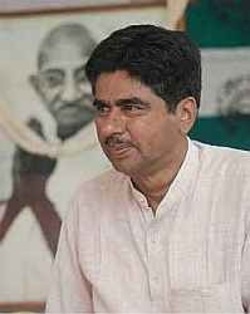 Rajagopal: "We are also trying to build an international campaign across continents with particular focus on Africa and Latin America, which are facing situations very similar to those in India and other Asian countries."

The commitment to carry out land reforms and redistribute land among the landless is a fundamental and constitutional one that the country has given to itself. However, the fact of the matter is that successive governments and their leaders have shown no allegiance to that commitment. They show some attention to it from time to time when there is a hue and cry among the public about a particular case of land acquisition or land redistribution. This attention is more focussed when there is some violence involved in this hue and cry. Even now, the matter has got greater attention because of the Bhatta Parsaul incidents. The problem with all these sporadic government initiatives is that they tend to revolve around two concepts of interventions. It is either development intervention or armed intervention, and the fact is that both are ultimately problematic. Both do not offer any lasting solution.

A group of tribal people of Raigarh in Chhattisgarh stated this in as many words to two Planning Commission members some time ago. They pointed out that when you are making development intervention, you take our land resources and when we shout against it you make an armed intervention. They pointed out that what they wanted was a “planning” intervention, where the human and livelihood concerns of the people are assimilated comprehensively as part of the planning process and the process is targeted at eliminating or reducing poverty. But where are the takers for such advice? What one has seen over time is that there is no effort to use land reforms as an instrument to eradicate or reduce poverty. On the contrary, there is a marked shift from the poverty eradication agenda, and land acquisition is increasingly becoming an instrument to facilitate large-scale corporate and technological intervention in the economy and society.

What according to you are the reasons for this shift? When did it gather momentum?

We started seeing this shift most markedly in the 1990s, with the advent of the so-called policy of economic liberalisation and globalisation. In the 1970s and 1980s we didn't see it so much, and there was a still a lot of room to bargain for land rights activists. But now things have come to such a pass and the grabbing of land by corporates is at such speed that we will have no land left for redistribution. I mentioned this in so many words in a letter that I wrote to Prime Minister Manmohan Singh recently.

Historically, one can see that the first two Five-Year Plans spoke at length about land. But after that the issue slowly disappeared from the radar. There were fewer and fewer statements about land reforms as a method to eradicate poverty, and there was an increasing shift in terms of industrialisation. And if you go through the manifestos of the political parties, almost all of them have increasingly become silent on this issue. The communist parties kept talking about land reforms in their manifestos until the 1990s, but later you'll find that they are also talking less and less about it.

At the level of planning and its ideology, I am of the view that the idea of a mixed economy walked out after the Second Five-Year Plan. Industrialisation became the byword as decades passed. I am also of the view that this shift happened basically on account of the pressure from different international organisations such as the World Bank and the International Monetary Fund [IMF]. Until the 1990s you had a kind of an Indian feeling that our nation should not give in to other nations or institutions, but after the advent of globalisation things changed dramatically and with alarming speed. It was nothing short of a radical shift in terms of the commodification of land. In the process, we have seen that in the last 20 years it became difficult to control the power of corporates.

You said that in the early Five-Year Plans there was some priority given to land reforms. But did the actual implementation measure up to what was projected on paper?

Implementation was always poor because the landed community became the rulers of the country. Only recently, 500 names of people holding more than 500 acres [one acre is 0.4 hectare] of land were placed in the Bihar Assembly, but nothing was done. A similar fate awaited initiatives such as that of the D. Bandopadhyay Commission report or the Land Ceiling Act, and hence the land reforms agenda was generally put on hold. The implementation of the Land Ceiling Act was replete with manipulation. There are records of big landlords transferring land not only in the names of their sons, daughters and other relatives but also to ‘bhokuram' and ‘myaooram', meaning dogs and cats of the household. Bhoodan was another initiative that underwent similar manipulations.

Coming back to the shift that has taken place since 1990, you see that along with this new process several people's agitations have sprung up across the country. It is in this context that the Centre has started talking about a fresh Land Acquisition Act. How do you look at this?

There is little doubt that there are so many Acts that need drastic change. The Mines and Minerals Act, the Wildlife Protection Act, the Land Acquisition Act, and so on. It is not just one piece we are speaking of, but because there is a lot of hue and cry about land acquisition, the government is saying that it will do something. This is short-sightedness of the law, when it takes this piecemeal approach.

Two expert committees had gone into the issue of land reforms and come up with detailed reports in 2006 and 2009. These were the report of the Working Group on Land Relations for formulation of the Eleventh Five-Year Plan and the Report of the Committee on State Agrarian Reforms and the Unfinished Task in Land Reforms. The reports are quite exhaustive and have concrete suggestions. After all this, when somebody like Rahul Gandhi or Sonia Gandhi says that they are bringing initiatives, my first thought is, can't these people read what is already there? There is this proposal in the current discussions saying that companies can buy up to 70 per cent and then the government will intervene and get the remaining 30 per cent. In the process, Vedanta would occupy 8,000 acres of land to set up a university, which actually needs only 200-250 acres. Companies are acquiring land today because land is expensive and tomorrow it will become even more expensive.

Tribal people constitute only 9 per cent of the population. But around 40 per cent of the land acquired is tribal land. Do you think that there is a qualitative shift in this demographic characteristic with corporate land acquisition? Have other communities also been affected recently?

Initially because of the tiger reserves, industries, and mining activity, tribal people were affected and that was why other communities were silent. But when there was land acquisition for special economic zones [SEZs], it was no more just the tribal people but also farmers who were affected. Then there were footpath vendors who were removed because of the beautification of cities and towns. And then, with the arrival of organisations like Reliance into selling vegetables, small shopkeepers were affected. I think it is a gradual process where only the big fish will survive and all others will be wiped out.

You talked about international forces putting pressure for the commodification of land. Do you mean international corporate companies?

It is a kind of grand alliance of international corporates, the World Bank, the IMF and various suppliant governments. In the recent agreement that the Government of India has signed with the European Union [E.U.], it is asking for larger investment in land and agricultural import. It is basically your sovereignty, the moment you give it away, all the land is converted for use other than food production. The larger argument is, as I understand, ‘Why do you get into this useless action? It's a global village, everybody will not produce everything. If Australia and America can produce so much food then why are you wasting your resources? You have so much iron and so much bauxite. Give us that and get your food.' The argument is at times very inviting, but this singularly fails to look at the possibility of a total depletion of these resources.

So, is there a sense that all these resistance movements are a kind of banging the head on the wall?

I would not say that. One can say that these movements are taking short, little steps and moving step by step. But, we are moving at the basic level of society and whatever happens, happens at the top. In the bottom we have a presence. We are able to move things at that level. We have won victories at many places, like Chilghaat and Lahroni in Madhya Pradesh and Maheshpur forest village in Gonda district of Uttar Pradesh where people have got approximately 1,000 acres of land they occupied years back after a lot of battle. I can give you hundreds of other examples where people are bringing about such changes in their lives. But even this is not sustainable; one land acquisition for a big corporate can shift the land away. So while you are making shifts at the bottom and helping people to take and consolidate their land and make it useful, you are also trying to take your battle to the top, to the policy level, because without a policy framework that is favourable even the land that you are holding today will be gone.

How to build this policy framework is the question.

Exactly. We need a policy for shift as well and that is why the movement will have to pitch the battle at both micro and macro levels. It was the macro-level struggle that led to the formulation of the Ministry of Rural Affairs' report, “State Agrarian Relation and the Unfinished Task of Land Reforms”. At least we made the government concede that land reform was an unfinished task. We are also trying to build an international campaign across continents with particular focus on Africa and Latin America, which are facing situations very similar to those in India and other Asian countries.