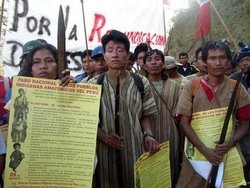 Indigenous peoples in Peru protesting in defence of their territories.


The Shawi indigenous people, also known as Chayhuitas, live in the territory made up by the basins of the Paranapuras and Cahuapanas Rivers, located in the provinces of Alto Amazonas (in the region of Loreto) and San Martín (in the region of San Martín). Distributed among 180 communities, the Shawi share a system of social organization and symbolic representation. Traditionally hunters and gatherers, they also practice agriculture, growing crops like cassava, corn, beans, rice, peanuts, bananas, pineapples, papayas, cotton and tobacco. (1) They also raise poultry and small animals, in addition to cattle. They market rice, peanuts, corn and beans, and currently practice fishing as well.

Like many other indigenous peoples, the Shawi suffered the horrors of Spanish colonization, struck down in droves by weapons and disease and forced into slavery. Independence from Spain did little to improve their lives: the Amazon rubber boom brought with it the tyranny of the rubber barons.

Years later, in 1974, the Law on Native Communities recognized the right of indigenous peoples in Peru’s Amazon region to collective ownership of their territories, although this was limited to the lands immediately surrounding established settlements. In 1977, however, the Forestry and Wildlife Law prohibited the titling of land designated as “suited to forestry” within the area of indigenous communities; this land would instead be transferred to state ownership. This measure totally undermined the rights of Amazon indigenous communities, since practically all of the land in the vast forested plain of the Amazon basin is “suited to forestry” and consequently, the indigenous peoples living there would be denied access to the forest, on which they largely depend for their livelihoods.

The Constitution of Peru recognizes the existence of native communities even when they are not registered as legal entities in public registers, but in order to obtain land ownership titles, communities must be officially registered. In accordance with the Law on Native Communities (article 11 of the Constitution), the state grants indigenous communities ownership titles for land suited to agriculture and the right of use for land suited to forestry. The land titling process for indigenous communities is extremely slow and bureaucratic, and is not viewed as a priority by the Peruvian government. In the meantime, activities like agriculture, forestry, oil operations and mining are rapidly expanding into territories where land titling remains pending. (2)
And in this context, Amazon indigenous communities have been hit with yet another violation of their rights.

On April 27, the Shawi people of the communities located in the district of Pongo de Caynarachi, in the province of Lamas, and the district of Papaplaya, in the province and region of San Martin – who are represented by the Shawi Indigenous Regional Federation of San Martín (FERISHAM) – denounced in an open letter that they have learned that a Korean company, ECOAMERICA, has applied for the registration and titling of more than 72,000 hectares of land, at a price of 80 cents a hectare, for crop production, logging and livestock raising. The land in question is made up by the territories of two Shawi communities and one Kechwa community, who have ancestral rights to these territories and have been officially registered as legal entities. (3)

The company had submitted its application to the Commission for the Formalization of Informal Ownership (COFOPRI) in the province of Loreto, an agency whose existence was completely unknown to the indigenous communities and others living in the area. After a considerable amount of legal wrangling, the application has now been put on hold, pending a decision by the Constitutional Court.

In response to this situation, the Shawi people declare in their open letter: “Our native communities do not have property titles, we have only legal recognition, and we are in possession of our ancestral territories. It is not just for our community lands to be valued at 80 cents a hectare; they want to hand them over without understanding the significance of the spiritual life of nature, of the trees, of the animals that the Shawi indigenous people protect.

“We are not accustomed to resolving our problems with their laws, we are not part of the process, we do not exist for the government, we do not have the resources to defend ourselves in the face of this situation. No government authority complies with ILO Convention 169, which says that the territories of indigenous peoples must be respected and that governments must do what is necessary to ensure that they are respected. No government authority has issued a statement or intervened. What do we have to do to be heard, and to receive justice?

“The Shawi indigenous people are saddened and angered. Tomorrow we could lose our ancestors’ territory, our mother earth, where we hunt animals and gather medicinal plants to cure our illnesses. The living forest helps us cover many needs. The government gives us nothing: the school has been abandoned, the children have no teachers. We are worried by the procedures that this company has initiated with regard to the forests, because we live at the headwaters of the rivers, and we believe we could be affected. We want peaceful dialogue, we want to be heard and our rights to our territory to be respected. We don’t want to suffer another Baguazo (4) but we are prepared to fight for our lands. If we must we will seek justice in accordance with our own customs.

“We do not understand why the government would hand over our lands to this company without consulting us, in silence. We are not second-class citizens, we are Peruvians, citizens with other customs, with a different culture. For years we have been asking for the titles to our land and the demarcation of our territory. And yet the requests of this company, which is not even based in the country, are being attended to because of its economic power.”

The Coordinating Committee for the Development and Defence of Indigenous Peoples in the San Martín Region (CODEPISAM) has endorsed this denunciation and stated, “For indigenous peoples, this is not a legal matter, rather it is the duty of the regional and national authorities to protect the rights of indigenous peoples, their territories, and their natural resources.”  (5)

But the efforts to strip Peru’s indigenous and peasant communities of their land and forests are much more widespread and are also reflected in Bill 4141 for a new Forest and Wildlife Law. Dozens of indigenous and peasant farmer organizations recently joined together to voice their opposition to the proposed new law, which would violate their rights and promote the invasion of vast agro-industrial plantations. (6) The indigenous peoples and peasant farmers of Peru are standing firm and remaining alert to fight these threats to their rights and livelihoods.