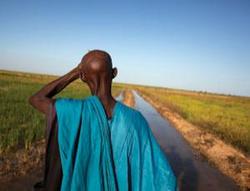 There is no doubt that this is not just about land, this is about water.

IS THIS the face of future water conflicts? China, India and Saudi Arabia have lately leased vast tracts of land in sub-Saharan Africa at knockdown prices. Their primary aim is to grow food abroad using the water that African countries don't have the infrastructure to exploit. Doing so is cheaper and easier than using water resources back home. But it is a plan that could well backfire.

"There is no doubt that this is not just about land, this is about water," says Philip Woodhouse of the University of Manchester, UK.

Take Saudi Arabia, for instance. Between 2004 and 2009, it leased 376,000 hectares of land in Sudan to grow wheat and rice. At the same time the country cut back on wheat production on home soil, which is irrigated with water from aquifers that are no longer replenished - a finite resource.

Meanwhile, firms from China and India have leased hundreds of thousands of hectares of farmland in Ethiopia. Both China and India have well-developed irrigation systems, but Woodhouse says their further development - moving water from the water-rich south to northern China, for instance - is likely to be more costly than leasing land in Africa, making the land-grab a tempting option.

But why bother leasing land instead of simply importing food? Such imports are equivalent to importing "virtual water", since food production accounts for nearly 80 per cent of annual freshwater usage. A new study into how this virtual water moves around the world offers an explanation for the leasing strategy. Ignacio Rodriguez-Iturbe of Princeton University and Samir Suweis of the Swiss Federal Institute of Technology in Lausanne have built the first mathematical model of the global virtual water trade network, using the UN Food and Agricultural Organization's data on trade in barley, corn, rice, soya beans, wheat, beef, pork, and poultry in 2000. They combined this with a fine-grained hydrological model (Geophysical Research Letters, DOI: 10.1029/2011GL046837).

The power of the rich club may yet increase. The model allows the team to forecast future scenarios - for example, how the network will change as droughts and spells of violent precipitation intensify due to climate change. Predictably, this will only intensify the monopoly, says Suweis. "The rich get richer."

China and India are not currently major players in the virtual water network on a per capita basis, and as the network evolves they could find themselves increasingly vulnerable to market forces and end up paying more for the food they import. Leasing land elsewhere is an attempt to secure their food and water supply in a changing world. But it could be a short-sighted move.

Last year, Paolo D'Odorico of the University of Virginia at Charlottesville showed that a rise in the virtual water trade makes societies less resilient to severe droughts (Geophysical Research Letters, DOI: 10.1029/2010GL043167). "[It] causes a disconnect between societies and the water they use," says D'Odorico. The net effect is that populations in nations that import water can grow without restraint since they are not limited by water scarcity at home.

Although this could be seen as a good thing, it will lead to greater exploitation of the world's fresh water. The unused supplies in some areas that are crucial in case of major droughts in other areas will dry up. "In case of major droughts we [will] have less resources available to cope with the water crisis," says D'Odorico.

In the end, then, the hunt for water that is driving emerging economies to rent African land to grow their crops could come back to haunt them.