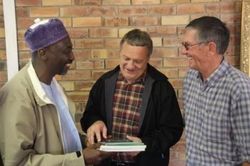 SA’s commercial agricultural skills are a sought-after currency on the continent, with Nigeria and Sierra Leone the latest to announce bold plans to recruit South African farmers to their countries.

Nigeria has 79-million hectares of arable land and 70% of the population is engaged in farming activities. Notwithstanding these factors, Nigeria each year imports food and agricultural products to the value of $4bn.

Robert Orya, CE of state entity Nigeria Export Import Bank, is working on a plan to improve the country’s commercial agricultural sector. "We want to tap into the expertise of SA’s farming community to enhance our agro-processing, livestock and commercial farming techniques," Mr Orya says. "We have generous tax incentives in place for any investor willing to consider our country as an investment destination."

Nigeria is also willing to assist investors in any sector to repatriate their profits to their home countries without regulatory obstacles.

In Sierra Leone, 11 years of civil war that ended in 2002 has negatively affected the economic development of that country.

Democratic rule has now been restored and the new administration under the leadership of President Ernest Bai Koroma has targeted agriculture as a key sector to stimulate economic recovery.

Sierra Leone has 5,4-million hectares of cultivable land, 90% of which is available for commercial agricultural opportunities. Rice, palm oil, sugar and cocoa are grown in the country.

He says foreign investors can lease land for an initial 50-year term followed by multiple 21-year extension contracts. Sierra Leone has also passed laws that would protect the investment of foreign firms from any civil upheaval.

On a visit to SA last month to drum up support for foreign direct investment, Mr Konteh also said his country would consider offering South African Airways a licence to operate domestic flights.

Farmers’ union TAU SA says its members would be encouraged by this announcement.

However, the union says it will only consider investing its farming technology expertise if these countries could guarantee the security of the farmers. "Africa has a big potential but we have been let down by governments on the continent when it comes to protecting the security and assets of our members," Bennie van Zyl, TAU SA’s general manager says.

"Quite often in Africa our members have experienced trust issues as their security could not be guaranteed and their assets being confiscated in times of political instability," Mr van Zyl says.

Despite these factors, farmers were committed to ensuring the continent’s food security through the continuous improvement of farming techniques, he says.