Ukraine to lift ban on sale of farmland in 2012, Le Monde says 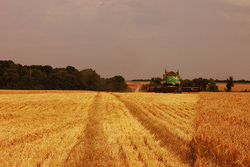 Ukraine plans to lift a ban on the sale of farmland next year, Le Monde reported, citing an interview with Agriculture Minister Mykola Prysyazhnyuk.

“We will, in the course of 2012, lift the moratorium on the sale of agricultural land,” Prysyazhnyuk told Le Monde during a visit to Paris, the newspaper said. The ban has been in place since land privatization in 1996, Le Monde said.

Ukraine also wants a commodity-exchange listing for Black Sea-export wheat in Kiev as soon as this year, and is in talks with the Chicago Mercantile Exchange, the newspaper reported, citing Prysyazhnyuk.

The agriculture minister opposes a government plan to tax grain exports because it would disadvantage farmers, he said, according to Le Monde.