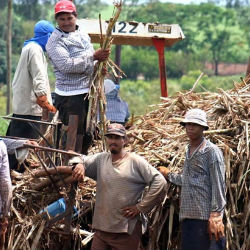 Brazil has already passed a law limiting the purchase of land by foreigners. Argentina and Uruguay are studying similar bills.

The nations of Argentina, Brazil and Uruguay have united to draft laws to limit acquisition by foreigners of extensive tracts of their fertile agricultural land. Foreign control of fertile areas limit food supply, officials argue.

LOS ANGELES, CA (Catholic Online) - The proposed measures are fairly reasonable. Neither Argentina, Brazil and Uruguay are members of the Southern Common Market (Mercosur) - the other member is Paraguay - proposes to ban land sales to private or public foreign capital, nor to regulate land use, nor to repossess land that has already been sold.

The three countries are trying to set limits on further expansion of rural properties in the hands of companies or citizens belonging to foreign countries that regard them as an asset to supply food for their own markets.

Brazil has already passed a law limiting the purchase of land by foreigners. Argentina and Uruguay are studying similar bills.

There are increasing concerns over the increasing purchases of land in these countries in recent years. Soaring international food prices along with the lack of other safe options for financial investment has made the issue a sore subject.

Grain, an international non-governmental organization working on behalf of small rural food producers, had already warned about this trend in 2008 and described concrete examples of its advance.

According to the report, China, Egypt, Japan, South Korea, Saudi Arabia, India, Bahrain, Kuwait, Oman, Qatar and the United Arab Emirates are all buying or leasing fertile land in other countries where food is not always abundant.

The nation of Cambodia, which receives aid from the World Food Program, has leased rice fields to Qatar and Kuwait, while Uganda has granted concessions on its wheat and maize fields to Egypt. Corporations from Saudi Arabia and the United Arab Emirates are making approaches to the Philippines.

Other land purchases in Ukraine, Senegal, Nigeria, Russia, Brazil and Paraguay, by banks and financial institutions have been of a speculative nature.

The Brazilian Institute for Colonization and Agrarian Reform (INCRA) said about 4.5 million hectares are owned by foreigners, but the government admits this figure is low and that the real area may be more than twice as large.

"Top priority in land use should be producing food for our people, but foreign companies buy land to speculate and to protect their assets, and they grow whatever is most profitable," a Brazilian advocate for rural farmers said.