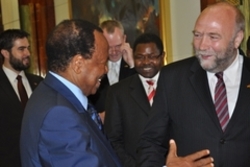 
Land policy and food security in Africa are of particular relevance for human rights commissioners and Africa representatives and therefore also for me personally. The issue poses numerous questions of an ethical, social, economic and environmental nature. At first glance, and indeed at second and third glance, those questions appear almost intractable, even contradictory.

Is there a conflict between the Green Revolution and the human right to food? Can land rights be sold or used commercially and does this not run counter to the right to food and to property? Is there a significant difference between hereditary tenancy and the purchasing of land? Who has the right to sell or lease land if no proper legal framework or state structures are in place? How are the interests of those who wish to lease or sell the land registered, and in how binding a way? And what about the interests of those who come from outside and use the land (or not, as the case may be)?

Has the "love affair with peasant agriculture," to use Collier's phrase, had its day? Or could this model actually enable parts of Africa to develop in a sustainable way into the continent's breadbasket? Is land grabbing really all about gaining land for agricultural use? Or is it perhaps more about gaining general influence in the country concerned or about unknown deposits of raw materials? Or geopolitics?

On the one hand, a Green Revolution offers great potential for development. Almost two thirds of the world's unused agricultural land is to be found in Africa. At the same time, Africa attracts only one third of all private investment in agriculture. Since the 1970s, Africa's share in worldwide agricultural exports has halved and now stands at under 4%. Yes, Africa is on the move – but it always has been. The question is, and always has been: in what direction? Analysts (at McKinsey, Roland Berger and the World Bank) believe Africa has great agricultural potential. In the first decade of this century, productivity increased enormously. So the Green Revolution could enable agriculture to experience the same increases in productivity as in the raw materials sector.

On the other hand, there are also many challenges and risks in Africa. 35 countries in Africa are net importers of food. That is not only a consequence of environmental change, it is also due to a lack of state structures.

Over half of all people in Africa still live from subsistence agriculture. They cook with wood, a renewable resource, when replanted, and therefore have a neutral impact on the environment. Development – as we understand it and also as the people of sub- Saharan Africa understand it – will add to, rather than relieve, the strain on the climate and the environment. We should not and cannot deny these people this development.

Young people are unlikely to find the prospect of labouring for a 12- hour-day under the hot sun in the maize field next to their house attractive when they can see on TV the other kind of life that people in Europe live. Many of them move to the next city and try to make a living driving a motorcycle taxi, thinking they'd rather be driving a moped through the wind than ploughing the fields. In the city, they can gain status in their own right, rather than just being their father's son out working the fields. To my mind, the process of urbanisation cannot be halted in any country - particularly if the rice offered by the World Food Programme at the docks is so much cheaper than the agricultural produce people have to labour hard to grow.

Large-scale activities by international agricultural concerns are also becoming an increasingly frequent phenomenon in Africa. Since 90% of all land in Africa is not formally registered but is governed by traditional or customary law, small farmers generally come off worst when the large investors move in. Agribusiness has made Brazil into a net food exporter - but has also resulted in the clearing of the rain forest, land erosion and land conflicts.

There are both dangers and opportunities in the large-scale purchasing of land. Investment in land in Africa has risen to massive proportions. It is reported that, in 2009 alone, foreign companies signed contracts for 45 million hectares of land.

Fertile land with access to irrigation is particularly attractive. Yet this land boom could also be a great opportunity for Africa, enabling it to attract capital, create jobs, modernise its infrastructure and adopt more efficient agricultural technology. But this has not been the case in all countries where large amounts have been invested in land purchases. Land speculation is rife. Many investors export the food grown in Africa back to their own countries. The studies that we have seen can prove no link between land purchases and food security. But perhaps other studies are available that will be discussed here today.

There can be no doubt of the need to address the needs of the local population.

1. The first step is for the government to conclude transparent and fair land deals with the companies.

2. Not every small farmer is a business person. Successful development can take place when small farmers join together and find a reliable buyer in these large companies.

3. This makes it easier for them to obtain loan. Development cooperation can play a role in this context by supporting agricultural banks.

5. A shift in views here in Europe is needed and the gradual dismantling of agricultural subsidies must happen.

Without doubt, we will need many more steps. Many of the necessary steps are already being taken as part of German development cooperation. Governance questions are key – in other words the recognition, recording and strengthening of tenure rights (rights to use and ownership), increased control over land markets and land transactions, binding legal provisions and transparency. Local land law and customary law must be converted into a modern – in other words, western – system of law.

In my opinion the question that is most difficult to address is almost never asked because we can offer no answer. Individual Africans want as good a life as we have. But do the African countries actually have the desire or the capacity to copy western countries or the Asian tigers? Unfortunately we seem reluctant to admit the acuteness of this problem in our, as I prefer to call it, UN-speak and our capacitybuilding.

The human-rights-based approach is often wrongly understood to mean that everyone has the right to a good life but no accompanying obligations. That is one of the greatest misconceptions in human rights policy. Human rights define what is a decent life, not what is a good one. If that is to be achieved, it will require hard work and good policies.

But perhaps a "good life" in Africa is something quite different? We provide an answer to this question through the type of development cooperation we engage in.

Are we and our partners aware of that? Is there really only this way? There probably is. Don’t we need an honest debate on this question and the time to conduct it – rather than just continuing down a pre-defined path, thus ultimately making any such debate redundant?

Our development policy must not leave people on the sidelines but should always place them at its core. It should consider people within their social context and also protect them as individuals by demanding observance of elementary human rights.