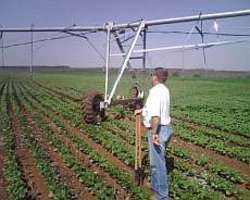 
Dongola - The Governor of Northern State Fathi Khalil, has unveiled that a number of local and Arab investors, have enrolled in the agricultural investment in his state, especially in the field of pivot irrigation.

He also disclosed the enrollment of an Emirates investor, to whom 95,000 acres have been allocated, in Um-Jawaseer. He will invest USD 15 million.

The governor also announced, while addressing the opening session of his state's legislative council, the arrival of a Sudanese Employers Union's delegation, to the state, in order to discuss the possible means of implementing these investments in the state, he added that a number of six new contracts, regarding gold mining, have been signed off.