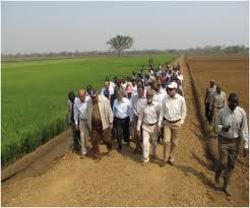 Owner of Saudi Star Agricultural Development Plc, the Ethiopian-born Saudi billionaire Sheikh Mohammed al- Amoudi, was in Abobo Woreda, Gambella on February 11/2011. This is where his company leased 10,000 ha of land for rice production.

The 24 Land lease agreements recently disclosed by the Ethiopian Ministry of Agriculture reveals that the federal Government so far leased about 350,099 Hectare land – of which about 285,012 to Foreign firms, while the rest to domestic firms and to members of the Ethiopian Diaspora.

However, the completeness of the list was not clear as the data doesn’t include some other leased lands.

There are the horticulture, especially flower, development firms that proliferated since 2004.

In fact, there was also a recent report by the Guardian, on March 21, that claimed:

The Ethiopian government says 36 countries including India, China, Pakistan and Saudi Arabia have leased farm land there.
Gambella has offered investors 1.1 million hectares, nearly a quarter of its best farmland, and 896 companies have come to the region in the last three years. They range from Saudi billionaire Al Amoudi, who is constructing a 20-mile canal to irrigate 10,000 hectares to grow rice, to Ethiopian businessmen who have plots of less than 200 hectares.

[I assume by '36 countries' the Guardian meant 'firms from 36 countries' - since it is firms, not countries, that are leasing land.]

However, the data presented Ministry of Agriculture is complete, it appears.

Land leasing mandate of the federal

Normally, leasing land is not a federal business.

According to the 1994 Constitution of the Federal Democratic Republic of Ethiopia, ‘The right to ownership of rural and urban land, as well as of all natural resources, is exclusively vested in the State and in the peoples of Ethiopia. Land is a common property of the nations, nationalities and peoples of Ethiopia and shall not be subject to sale or to other means of transfer.’(Article 40(3))

Yet, small holders farmers may lease their land for 3-5 years, while the governments may lease rural land for investors for up to 99 years.

But the power to lease land and collect revenues is that of the respective regional government, rather than the federal.

Thus, in the last two decades, the regional governments had been leasing land to investors and collecting the rental revenue. That is why the district administrations of Gambella signed a contract that leased to Karuturi and Saudi-star, on Aug 4/2008 and Sept. 29/2009, respectively.

However, at the end of 2009, the executive committee of the ruling party, EPRDF, decided, in its quarterly meeting, that the Federal government should take over the land leasing responsibility on grounds of efficiency and monitoring capacity.

The decision was formalized by letters written from regional governments, notifying the decision of their Cabinets, to the Ministry of Agriculture delegating their rural land leasing power with regard to plots lands larger than 5000(?) Hectare. Yet, the revenue belongs to the regions, which also retain the power to lease smaller plots of lands.[It appears the 5000 Hectare benchmark was revised later and varies across regions.]

So far, all regional governments except Harari and the Chartered cities of Addis Ababa and Dire Dawa, identified and assigned about 3.7 million Hectare land to the Ministry of Agriculture.

The progress of the available land identification and assignments is monthly reported to the Prime Minister by the Ministry of Agriculture. The Ministry also claims to conduct a monthly monitoring and supervision on the plots of land it has transferred to firms so far.

[This is the third post of the 'Land grab' deals review series that discusses the recently released Land lease agreements.]