The end of the African peasant? From investment funds and finance value-chains to peasant related questions

The last couple of years have been characterized by a "rediscovery" of agriculture as a sector for strategic activity. This sector had been gradually relegated both in the public policy agenda for whom the myths of an essentially urban growth and provision of agricultural produce at moderate cost contributed to maintain this chronic indifference, as well as in private investors’ strategies discouraged by the low financial margins and the risks inherent to this activity.

In 2008, the food crisis aroused renewed interest in a 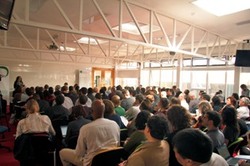 International Conference on Global Land Grab, at the University of Sussex. Source : LDPI

griculture of these various actors. On one hand, the national and international authorities presently recognize the urgency of the agricultural situation in the developing countries. In 2009, at Aquila, US$20 billion were promised by the G8 members to fight the hunger. However, these promises are yet to be materialized as the decline of public aid to development (PAD) focusing on agriculture engaged in since the 1980s continues3. (Re)-putting the agricultural question on the political agenda by governments and development agencies thus only represented a discursive "revolution". On the other hand, this crisis has resulted in an awakening of the private sector, and more particularly financial market Actors. The structural evolutions and the projections regarding the agricultural sector (increase of population, increased pressures on natural resources, dietary changes and energy tendencies) conjugated to the effects of the food price crisis of 2008 (questioning the myth of permanent low costs of food commodities) are pushing investors towards agricultural activities. Perceptions have changed: henceforth, this sector presents interesting financial returns on investment perspectives. The financial crisis of 2009 strengthened this dynamic. Confronted to the uncertainties affecting financial assets (in particular those of the American treasury), investors use the farming sector as a refuge value.

The end of the African peasant?