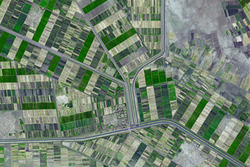 South of Khartoum, Sudan, where the White and Blue Nile Rivers join, a dizzying arrangement of irrigated fields stretches out across the state of El Gezira, December 25, 2006 (Photo: NASA)

Khartoum — Hundreds of farmers in El-Gezira state in central Sudan staged demonstrations to reject what they described as injustice inflicted upon them by the government in evaluating rental price of land plots they own.

The protestors marched in Barakat town and set up tents in front of the headquarters of the El-Gezira agricultural project and threatened an extended sit-in until their demands are met. They chanted slogans including "No for sale, Yes for rental" and "Your land is your honor".

The El-Gezira project, which includes over 2 million acres of land by the Blue and White Nile rivers and employs 130,000 farmers, traces its origins to British colonial times. It initially developed land for cotton through a system of canals.

Among demands made by farmers is a reversal of the rental value assessed by the governmental technical committee which was lowered from 3,650 Sudanese pounds per acre to 1,585. They also refused to sell their lands and threatened to bring their families to join their protests,

The authorities arrested dozens of demonstrators and prevented journalists from reaching the area.

Separately the office of Sudan's 2nd Vice president Ali Osman Taha denied reports that he has agreed to grant Egyptian farmers one million acres during his meeting with a visiting Egypt delegation from Al-Wafd party and other figures.

Taha's office said that such a step has to be made through the proper channels after working out the details.