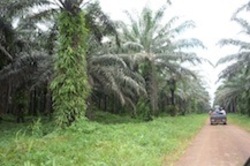 PARIS, May 9, 2011 (IPS) - Increasing industrial production of oil palm in sub-Saharan African countries, carried out by foreign corporations, is destroying the livelihoods of thousands of Africans and the biodiversity of ecosystems. Despite this, industrialised countries’ governments and development agencies continue to promote such production.

African countries most affected are Nigeria, the Democratic Republic of Congo and Ghana. But palm oil fields and industrial facilities are located in at least the half of sub-Saharan African countries.

In the vast majority of cases, the industrial production of oil palm is in the hands of foreign corporations, such as the French Bolloré group, the Brazilian petroleum group Petrobras, the Italian company ENI and the Singapore-based Wilmar International. Most of the exploiters are European Union-based companies.

The industrial system of oil palm production in Africa "is based on monoculture plantations where the land only produces palm fruits for industry," according to Ricardo Carrere, an expert in forest management at the World Rainforest Movement (WRM).

The WRM, with a secretariat in Montevideo, Uruguay, is an international organisation promoting local people’s land rights.

"In most if not all cases, land is taken away from local communities with little or no compensation, and bio-diverse ecosystems, mostly forests, are destroyed and substituted by large areas of palm monocultures," says Carrere, author of "Oil palm in Africa: Past, present and future scenarios", a report that the WRM published in 2010.

Carrere told IPS that all the foreign oil palm facilities in Africa are characterised by appalling working conditions. "During the colonial times, slavery and forced labour were the daily toll of Africans in such plantations. In the modern system, the conditions are near-slavery with low-paid labour."

As an example, Carrere mentions the oil palm plantations and industrial facilities managed by the Bolloré group in Cameroon. "The living and working conditions there are abysmal," he comments. "The living quarters are insalubrious; there is no regular access to water or electricity; and the temporary employees earn extremely low wages."

According to Carrere and other researchers, hundreds of subcontracted workers toil in these plantations and facilities for six days a week, sometimes from six o’clock in the morning until six o’clock at night, with no social security coverage and earning around two dollars per day.

In his survey, Carrere compared modern, foreign-led industrial palm oil production with the traditional process. "The modern system is even worse than the old one. The new one is characterised by extensive drainage of the land and widespread use of agrochemicals, both impacting on local water resources."

The recent expansion of the industrial plantations of palm oil has been mostly led by growing demand in industrialised countries for so called agro-fuels, falsely seen as an ecological alternative to fossil fuels.

But the local ecological impact of the palm oil production in sub-Saharan African countries is disastrous, according to numerous surveys. The case of the Bugala Island plantations in Lake Victoria in Uganda serves as another illustration.

According to a study by the Kalangala District Forum of nongovernmental organisations, the palm oil plantations there have increased pressure on central forest reserves, substantially contributed to the depletion of forest products, deforestation, soil erosion and the draining of wetlands.

Furthermore, these plantations have had negative socio-economic effects for the communities living on the islands. These consequences include the violation of land rights of indigenous people, the loss of land as a safety net and reduced access for local communities to resources.

The forum also underlines that the plantations have contributed to the sudden rise of the price of land and destroyed the community-based local economy.

Carrere raises alarm about the "crucial role" of national, regional and multilateral institutions in the promotion and development of foreign investments in the industrialisation of palm oil production in sub-Saharan Africa.

It is important to stress that such support has ignored all the accumulated evidence regarding the negative social and environmental impacts of large-scale plantations elsewhere in the developing world, Carrere says.

He stresses that these international efforts have "also ignored the social benefits of traditional sustainable practices in the production of palm oil. As a result, most support has been aimed at the development of the industrial model and practically none has been provided to the traditional system."

Other foreign state agencies alleged to be exacerbating the expansion of palm oil in Africa are the U.S. development agency USAid and the U.S. department of agriculture, Britain’s department for international development (Dfid), Finland’s FinnFund and Germany’s agency for technical cooperation, among others.

United Nations agencies are also implicated, such as the Food and Agricultural Organisation and the International Fund for Agricultural Development that have intervened in favour of the industrial production of palm oil in Africa.

The foreign oil palm plantations and facilities in Africa have generated legal conflicts in companies’ countries of origin. In France, for instance, the Bolloré group in 2010 brought legal challenges against two press reports on its activities in Cameroon.

The court in Paris ruled that the first report could not be considered defamatory. In the second case, no ruling was handed down, apparently because the Bolloré group decided to withdraw the charges two weeks before the trial was scheduled to take place.