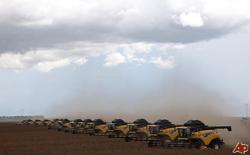 "It's important that they come and make these investments," Agriculture Minister Wagner Rossi said, citing the paper and cellulose industry as one among many which would benefit from new investment and know-how.

Brazil is the world's top producer of coffee, sugar, beef and orange juice, and the world's No. 2 exporter of soybeans.

Although agricultural exports have boosted Brazil's strong economic growth, Rossi said a lack of foreign capital has deprived the country of foreign expertise to raise efficiency and competitiveness.

The changes do not affect prior sales and foreigners can still buy land between 250 hectares and 5,000 hectares, depending on the region. Still, the new rules have already had an impact.

At least $15 billion of foreign investment in Brazilian land has been halted since reinterpretation of real estate laws, according to two local agricultural analyst groups.

Rossi pointed to Australian legislation, which allows land leasing for 99 years, as an example of the system Brazil wants to introduce. The terms may be closer to 50 years but details still need to be worked out, he said.

"What we don't need is land transfers, but rather partnerships," Rossi told a group of foreign journalists late on Friday at his home in northern Sao Paulo state.

The government is also looking at setting up an inter-ministerial commission to study outright foreign land purchases on a case-by-case basis, to determine whether they would be beneficial to Brazil.

"If it is approved, there won't be a problem. You just go ahead and buy your land," he said, adding that the attorney general's office is studying legal options along with other ministries and will recommend a joint government position.

Rossi said if the leasing path was chosen, it could be introduced as early as this year.

Turning to plans for the sugar and ethanol sector, Rossi said the government was considering reserving any loans it made for the opening of new mills crushing sugar cane, exclusively for those which would produce ethanol only and not sugar.

The rapid ascension of Brazil's sugar cane-derived ethanol industry has stumbled since the global financial crisis and output has failed to rise fast enough to meet demand mainly from the country's large fleet of flex-fuel cars that can run on it alone.

"What we plan to do is give resources to ethanol plants and not sugar plants. It's strategic. Right now we must improve our production of ethanol," Rossi said, although he added that no firm decisions have yet been taken.

Brazil is the world's No. 1 exporter of sugar and higher prices for the sweetener since last year have made it far more profitable to produce and export than ethanol, which is produced mainly for the domestic market.

Such is Brazil's concern about volatility in the price of ethanol, which most Brazilian drivers use when cheaper than gasoline, that oversight of production was placed under the control of the National Petroleum Agency last month. (Editing by Kieran Murray and David Gregorio)