Glencore: Profiteering from hunger and chaos 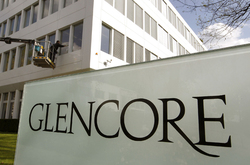 Glencore controls more half the global copper market and almost ten per cent of the planet's wheat trade (Photo: Reuters)

The rapid rise in prices for food, fuel and commodities has been disastrous for the world's poor, including Indonesian market vendor Lia Romi. But it's a bonanza for multinational trading firms such as Glencore.

While Romi has trouble feeding her family, Glencore - the world's largest diversified commodities trader - is planning a US$11billion share sale, likely the largest market debut ever seen on the London Stock Exchange.

"The price for our daily food has at least doubled in the past two years," Lia Romi told Al Jazeera through a translator. "Food costs 100 per cent of my family's daily income [of about $3]. I have nothing saved and I owe [money] from my [market stall] business."

While Romi, and millions like her, worry about feeding their families, the initial public offering from the commodity speculating giant will create at least four billionaires, dozens worth more than $100million and several hundred old fashioned millionaires. Chief Executive Ivan Glasenberg is set to make more than $9bn from the share sale. And speculating on food prices is an important part of his wealth.

"They are possibly one of very few mining companies that are price makers, rather than price takers," said Chris Hinde, editorial director of Mining Journal magazine. "They are the stockbrokers of the commodities business [operating] in a fairly secretive world. They are effectively setting the price for some very important commodities," he told Al Jazeera.

The firm employs about 57,000 people, generated a turnover of $145billion in the past year and has assets worth more than $79billion. Glencore's media department refused interview requests from Al Jazeera.

"Glencore owns almost 300,000 hectares of farm land and it is one of the largest farm operators in the world. They are engaging in speculation on the grain trade and have immense market power," he told Al Jazeera.

Global food prices have climbed recently, returning close to their 2008 peak, when bread riots swept parts of the Middle East, Africa and the Caribbean.

"A disturbing amount of price increases, I fear, is being driven by speculative activity," Marcus Miller, a professor of international economics at the University of Warwick, told Al Jazeera. "Bets [on future price rises or declines] can become self-fulfilling if you are big enough to affect the market."

In March 2011, the World Bank's global food index was 36 per cent above levels from a year earlier, although prices for commodities have dropped in the past few weeks.

Some analysts believe price increases have more to do with a growing global population and rising middle classes, particularly in India and China, who are eating more meat and thus driving up prices for corn and other animal feed.

Duncan Green, the head of research at development organisation Oxfam Great Britain, said international markets for food and other commodities can be compared to the shape of a champagne glass. "There are a lot of people producing, and a lot of people consuming, but there is a pinch point in the middle, controlled by corporations who can walk away with the final value," he told Al Jazeera. "Many of the world's poor are -bizarrely - people growing food."

In 2010, investment bank Goldman Sachs warned of "violent price spikes" in commodities markets, and that prediction has more or less come true.

To make money betting on food, metals and energy, Glencore – like other trading houses and hedge funds – relies on one crucial commodity: Information.

"They have offices all over the world and unique access to information about production and distribution," said food security researcher Kuyek. "When the people who have that information are also the ones speculating, there is grave cause for concern; they can purchase forward contracts when they know prices are going up."

In August 2010, for example, Russia issued a ban on grain exports, after droughts ravaged crops. On August 3, the head of Glencore's Russian grain unit encouraged the government to halt exports. The government followed his advice on August 5, causing prices for cereals to rise 15 per cent in two days.

"Days before the export ban went into place, Glencore made huge bets," said Kuyek. "They had some kind of information there; companies with information are in the best place to capture profits from volatility." Glencore, for its part, said it also lost money as a result of the ban, because it had to fulfill delivery obligations to clients outside Russia at the new, higher price.

In addition to manipulating food prices – potentially with insider information - the trading giant appears to have broken laws on several continents.

Prosecutors in Belgium charged Glencore employees with criminal conspiracy and corruption, alleging they illicitly sought confidential information on European export subsidies from a public official. The case will be heard in Brussels on May 12.

During Saddam Hussein's rule in Iraq, and the UN sanctions which accompanied its final years, Glencore made handsome profits marketing embargoed oil. In February 2001, Glencore bought 1million barrels of Iraqi crude oil destined for the US and diverted the black gold to Croatia, where it was sold for a premium of $3million, according to a UN Security Council report.

When the news broke, the Sunday Times newspaper in the UK headlined their investigation "Secretive Swiss trader links City to Iraq oil scam".

He traded oil for Ayatollahs when Iran was blacklisted by the US, did business with South Africa's apartheid government and skirted US trade embargoes on Cuba and Libya to make trades under the motto: Do whatever it takes.


"There will always be allegations that they [Glencore] are dealing with some unsavory folks," said Chris Hinde from Mining Journal magazine. "But I wouldn't say that makes them unusual for traders."

Tony Hayward, the disgraced former BP CEO who presided over the worst oil spill in US history, has been approached by Glencore to become a non-executive director on the board of the company when it becomes public.

While Rich sold the company in 1993, his take-no-prisoners approach to the commodities business lives on in today's traders and speculators, including the South African CEO Ivan Glasenberg, who gave Rich's trading empire the name Glencore.

In a January interview with the Financial Times newspaper, his first in 20 years, Rich supported the share sale, although he acknowledged that it is "much more convenient" for a trader not to be a public company as mandatory disclosure and regulatory oversight "limits your activity".

Perhaps, Glencore is going public to increase its size, allowing it to acquire large competitors, particularly the mining giant Xstrata. "They are so big now, that they cannot get any bigger unless they are listed," Hinde said, adding that some of the firm's 800 partners might want to take the company public with the hope of cashing out their millions over the next few years.

Regardless of the firm's reasons, institutional investors from the US, East Asia and the Middle East have all committed to buying.

Aabar, the sovereign wealth fund from the United Arab Emirates, controlled by Abu Dhabi's oil-rich monarchs, is expected to become the largest "cornerstone investor", pledging to buy about $1billion worth of stock.

"It seems that they are buying a stake to strengthen the UAE's control over the global grain trade, for their own food security," said Kuyek. "In the absence of anything meaningful being done at the international level, - except for the same prescriptions of open markets and trade liberalisation." Food insecure countries in the Gulf, Northeast Asia, Korea and other regions are attempting to gain more direct control over food, as the market economy "can’t guarantee decent prices", he said.

Back in her hut in Indonesia, on the front lines of the global food crisis, Lia Romi hasn't been following Glencore's stock flotation. She is worried about how to feed her three kids.

"I've sacrificed several times not to buy books or clothes for my daughter and son, just for our daily food because I have no savings at all," she said.

As Glencore's directors prepare to pocket their millions, it's unlikely that they will bet on Romi's future, as fluctuations in the global market could push her family over the edge.

"Stability is to be prized," said Oxfam's David Green. And that is the last thing Glencore wants, as it's instability which is most profitable - for those who have the inside knowledge to exploit it.