Yes it is indeed Land Grab and illegal too 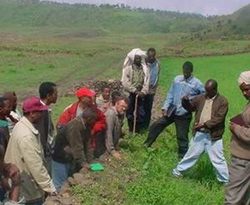 The TPLF/EPRDF Foreign Minster Mr. Hailemariam Desalegn on Indian TV, ITMN, with Vickram Bahi was asked serious question. What is the guarantee for foreign investors on long term land lease in years to come ? Mr. Bahi pressed the question when Mr. Hailemariam tried to evade it. As correctly put by the host, the Domestic Concern of giving land to foreigners will put investors in awkward positron who would like to make money on  long term. Who will guarantee their hold on the land?

Mr. Hailemariam promised the rule of law and the democratic system to take care of this concern. However he rejected the domestic concern because according to him land is not a domestic issue in Ethiopia. He goes on to say that this is the issue of the Diaspora and foreign NGOs. Foreigners/Diasporas accusing the land lease as land grab is totally wrong because he said TPLF is giving uncultivated land, that  means no land is taken away from farmers to be given to foreigners and calling it land grab is inaccurate.

If you go to foreign country and take land whether it is unoccupied or under farm and make it yours for long term lease up to ninety years what do you call it ? It is indeed land grab because foreigners totally control it as theirs and those who leased it  might not be there tomorrow but according to Mr. Hailemariam foreigners hold will be defended by the rule of law  specifically he said by the court.

That is totally absurd. In a transparent system first of all this long term land lease would never have materialized. This transaction of land is carried out by a regime that is in power by force and where are no independent institutions the courts and free media are nonexistent. As far as Ethiopians are concerned whatever deal foreign land grabbers made with TPLF/EPRDF is null and void.

Though the concern of Mr. Bahi is valid he did not get satisfying answer from his guest. In fact if the host had good information he could have put the question of why farmers are now pushed from their holdings in Gambella, Beni Shanguel as was reported in VOA Amharic and BBC to clear the land for foreigners. What will Mr. Hailemariam answer for the people who were interviewed on BBC and VOA who were told to clear the land for those who leased/bought it. It is mine You have to Go !!!!

The truth is the regime in power is making fast cash for cheap land transaction. Foreigners are gambling on the cheap offer and take a risk like any investment. Here is where the sellers and buyers come together. But there is a huge discontent in Western part of Ethiopia currently silenced by army and militia. The Diaspora is just airing the voice of the voiceless Ethiopians for those who are on land bonanza to stop hurting our people. There is a great danger coming. When? No one knows but it is coming.

The regime who sold land cheaply will for the time being can give protection for these foreign landlords but what happened in Madagascar few years ago is surely can happen in Ethiopia. The Madagascar people rose up on those who sold their land to Koreans and if Mr. Hailemariam thinks this will never happen he will be surprised like he was surprised by the fast Indian development.