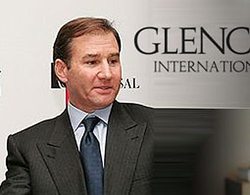 Glencore's flotation will value the stake belonging to Glencore chief executive Ivan Glasenburg (above) at $10bn, with four other executives becoming overnight billionaires. The Financial Times reports that Aabar, a unit of Abu Dhabi’s International Petroleum Investment Company, will invest $850m in Glencore as a cornerstone investor, with at least another $150m to be bought during the bookbuilding process. As such, the emirate is set to become Glencore’s largest shareholder, after the company’s employees.

Choose your battles. Is that the secret of the successful grain merchant?

It would appear so, to judge by Glencore, which for a multi-commodities giant maintains a relatively modest share of the "addressable" global grain trade, at 8.7%, and only 4.5% in oilseeds and oils, despite claiming an enviable record of winning business.

"Glencore estimates that it is awarded at least part of the tender in at least half of the agricultural tenders in which it participates," the company says in the prospectus to accompany its stockmarket flotation later this month.

And even when it loses, "it is sometimes able to supply part of the tender to the successful applicant".

Little wonder that the group's agricultural products segment more than doubled underlying operating profits last year, to $717m, a performance in line with the company average, and making it, unusually, a bigger earner than Glencore's energy products division, which is nearly nine times the size by revenues.

Not that winning tenders is the only trick boasted by the division's 8,000 staff, with last year's result also reflecting "tight and dislocated market conditions" – in contrast to a slump in profits in 2009, when low grain price volatility "reduced the number of arbitrage opportunities".

"Numerous traditional and single commodity players were exiting the industry. This lack of competition was seen as an opportunity for another major player," Glencore said, noting that its trading volumes in the fibre reached some 200,000 tonnes last year, from minimal levels in 2009.

This was the reversal of the group's performance in sugar, in which volumes halved to some 500,000 tonnes – a decline which was left unexplained.

Furthermore, Glencore's 270,000-hectare farming operations achieved higher production last year despite the poor weather which beset many of the regions in which it operates.

Sure, the group's Kazakh division suffered amid the drought in the former Soviet Union, seeing production fall by more than 60% to 18.6m tonnes. (It is not clear from the prospectus if farm expansion or sales are also involved in changes in output data.)

And the company was not alone in Australia in reporting a bumper harvest, up by more than one-half at 103,500 tonnes.

But it achieved higher production in both Ukraine, its biggest production operation by crop volume, where the corn harvest soared, and Russia.

Volumes rose 16% in Argentina, where Glencore appears to have near given up on wheat (about which many farmers have gripes over government export restrictions) in favour of corn and, in particular, soybeans. The company's harvest of the oilseed doubled last year.

The data are among the raft of revelations about what was a famously secretive business, widely touted as "the biggest company you have never heard of", in the run up to its flotation in London and Hong Kong.

In agriculture, other snippets include an acknowledgment that it is "very active" in trading in sugar on New York's Ice exchange, besides on markets in China, India and Russia.

Perhaps the most widely publicised detail has been the revelation that the flotation will value the stake belonging to Glencore chief executive Ivan Glasenburg at $10bn, with four other executives becoming overnight billionaires.

However, it is not all plain sailing, as one unnamed current employee, a former staff member and Glencore Grain Rotterdam have found, who have been charged with corruption "in exchange for information covered by professional secrecy in the course of the applications for European export restitutions".

The case, involving "violation of professional secrecy, corruption of an international civil servant and criminal conspiracy", and which has dragged in the European Commission's agriculture directorate, is a dated one, relating to 1999-2003.

But, with the trial scheduled for this year, that may not prevent the allegations from reaping Glencore unsavoury coverage, now that the media have been alerted.

Will the group regret allowing sunlight in on its operations? That the flotation will create scores of Glencore millionaires, besides the billionaires and give the group a market value of some $60bn suggests otherwise.