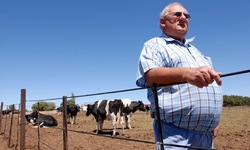 They are calling it the next great trek. Almost two centuries after Boers hitched their wagons to oxen and headed inland to establish the South African republic, they are on the move again. This time they are flying – and their destination is the whole of the African continent.

White South African farmers are now being courted by the north, by countries who believe their agricultural expertise can kickstart an agrarian revolution across the continent. They are being offered millions of hectares of allegedly virgin rainforest and bush, as well as land already farmed by smallholders or used as pastures by herders.

In the biggest deal to date, Congo-Brazzaville has offered South Africa farmers long leases on up to 10m hectares of land, an area that includes abandoned state farms and bush in the remote south-west of the country. The first contracts, which put 88,000 hectares in the hands of 70 farmers, were signed at a ceremony in the country last month.

Meanwhile, in Mozambique, some 800 South African farmers have acquired a million hectares in the southern province of Gaza, thanks to an arrangement set up by sugar farmer Charl Senekal, an associate of the South African president, Jacob Zuma. This deal will be celebrated at a ceremony in Pretoria next month.

There have been sporadic moves north by white South African farmers since the end of apartheid. But the current migration is more organised, says Ruth Hall of the Institute for Poverty, Land and Agrarian Studies at the University of the Western Cape in South Africa. "South Africa is exporting [not just] its farmers, but also its value chains, to the rest of the continent," she told a meeting on international land grabs in Brighton last week.

The mass movement is mostly organised by Agri South Africa, an association that represents 70,000 South Africa farmers. Its president, Johannes Moller, made a pitch for new deals at a conference on large-scale farming in Africa, held in Cairo last April. Since then, Agri SA has received offers of land from 22 African countries, says Hall. Along with free land come tax holidays, free rein to export produce and profits, and promises of new roads and power lines – angering local peasants who have never enjoyed such benefits.

Zambia wants South African pioneers to grow maize, and Sudan is offering land and irrigation water to grow sugar cane. Another deal, currently on hold, would see them take over 35,000 hectares of Libya.

With one-third of South Africa's white-owned farmland to be transferred to black owners by 2014, many white South African landowners are keen to find new territory, though most want to keep their home farms as well, says Hall.

The new trek is attracting support from major South African finance houses such as Standard Bank and investment funds such as Emergent Asset Management, a UK-South Africa fund run by former Goldman Sachs high flyer Susan Payne. She claims to be investing in 14 African countries and promises a 30% annual return.

Many African countries believe the new white farmers can end their reliance on food imports. But the farmers and their financiers often have other plans. According to Theo de Jager, Agri SA deputy president and mastermind of the international deals, the farmers in Congo-Brazzaville want to grow more profitable tropical fruit for export to European supermarkets, rather than grains for locals.

Another concern is what land the farmers are being offered. The governments making overtures towards claim there is ample "empty" land – in which case the threat is that forests and other biodiversity hotspots will be gobbled up.

But much of the land is, in reality, already occupied by farmers and pastoralists. While the Congo-Brazzaville government says the land it is handing over to white South Africans has been empty since the closure of state farms more than 10 years ago, Hall says its former owners have returned and are growing cassava and peanuts. Like the original trek, the new invasion is likely to be met with resistance.