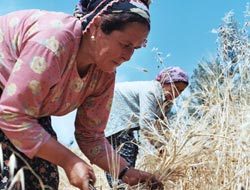 Saudi Arabia foresees investment of $600 billion in Turkey during the next 20 years, according to Abdul Kareem Abu al Nasr, the chairman of National Commercial Bank, the biggest Saudi lender.

Investment in Turkey’s agriculture and manufacturing is set to increase, Abu al Nasr says today in a presentation to be delivered in Turkey, a copy of which has been obtained by Bloomberg News.

“In the agriculture space, Turkey emerged as one of the top recipients of Saudi investment, as the kingdom seeks to boost its food security,” he says.

Planet Food World Co. will invest $3 billion in Turkish agriculture in the next five years, with the aim of exporting food products to the Gulf region, he adds.

The strength of Turkey’s agriculture enabled exports of farm products to Saudi Arabia to increase from $90 million in 2008 to $144 million in 2009, according to Abu al Nasr.