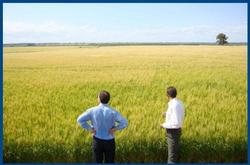 Inflows of private capital in agriculture worldwide are expected to more than double to around $5 billion to $7 billion in two years as rising food prices spur investments in farm land and production facilities.

"What we are seeing right now is a lot of interest from institutional investors, private capital, pensions and endowment foundations to invest in real assets," he told Reuters on the sidelines of an industry seminar in Singapore.

Private capital investment in farming in expected to more than double to around $5-$7 billion in the next couple of years from an estimated $2.5-$3 billion invested in the last couple of years, he told Reuters (all figures US$).

The benchmark U.S. corn prices climbed to an all-time high earlier this month as strong demand across the livestock, ethanol, export and investment sectors faced the tightest stocks since the 1930s.

Although soybean futures have been largely unchanged this year because of a temporary slowdown in imports by China, the world's top importer, the market is expected get a boost in the months ahead as farmers in the U.S. plant more corn and Beijing lifts purchases.

U.S. grains rallied on Monday after a holiday weekend, with corn and wheat adding around two per cent each, on continuing worries about weather in major growing areas and limited stockpiles.

South America is likely to lead the global expansion in agriculture with surplus land and existence of large-scale farm operations in the region, even though investors are also looking at Africa for growth, Erickson said.

"Where people are seeing the expansion to handle rising demand from China and Southeast Asia, is mostly Brazil and other countries in South America," he said in an interview.

"The biggest area is South America which has the most potential. Africa too, but with South America the difference is that you already have large-scale farm operations occurring there."

South America is the biggest producer of soybeans in the world with Brazil and Argentina the second- and third-largest soy exporter after the U.S. Argentina is also the world No. 1 soymeal and soyoil supplier.

"It (agriculture) is attracting foreign capital and you have some very large groups that have basically emerged from nowhere," he said.

Foreign investors such as Argentina-based El Tejar and George Soros's Adecoagro have snapped up land even in the sparsely populated Uruguay, one of the region's most stable.