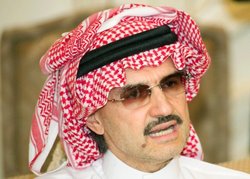 The Saudi prince said he had taken the agricultural property "as a service to the Egyptian people".

KUWAIT CITY — Saudi Prince Alwaleed bin Talal announced Sunday an agreement has been reached on returning most of his disputed agricultural land in Egypt back to the government.

Alwaleed said he would return 75,000 out of a 100,000-acre (40,469 hectare) agricultural property frozen two weeks ago by Egypt's public prosecutor after raising questions over the legality of its sale in 1998.

"We have reached a preliminary deal satisfactory to us, to the Egyptian people and government to return 75,000 acres," Alwaleed told reporters in Kuwait City.

"We have signed the deal which will be studied and approved by the Egyptian government."

Alwaleed, a nephew of the king with an estimated fortune of $20 billion, said he would continue to invest in the remaining 25,000 acres of the property known as Toshka, but no further details were disclosed.

The prince said he had taken the agricultural property "as a service to the Egyptian people," and that he could have sought international arbitration but decided against it.

Since the fall of Mubarak, the Egyptian government has been cracking down on a large number of allegedly corrupt deals involving former top officials.