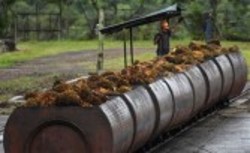 Palm oil groups have known for a long time that the supply of land for planting is running out in Indonesia and Malaysia, the world’s biggest producers, but the question of exactly when has been the focus of recent discussion. So it’s fascinating to see research from Kuala Lumpur based Nomura analyst Ken Arieff Wong, concluding that the deadline could be as little as nine years away.

That’s not long, given the 25 year life cycle of the oil palm, and it helps to explain why industry giants such as Malaysia’s Sime Darby and Singapore’s Olam International and Wilmar International are scrambling for fresh space space in equatorial Africa.

According to Wong’s research, Malaysia could run out of plantable land by 2020, and Indonesia by 2022, in part because of increasingly strict rules on land expansion generated by concern about deforestation and habitat loss for endangered species such as orangutans.

Of course, much depends on the assumptions use to calculate the rate of planting, but Wong has been deliberately conservative, forecasting a 7 per cent growth rate for plantings in Indonesia and 2 per cent in Malaysia, with a maximum of 50 per cent of usable land being planted.

The growth estimates are well below the breakneck pace of earlier years, reflecting the more difficult environment, although Indonesia’s planted hectarage would nevertheless grow by more than 100 per cent over the period to more than 14m hectares, with Malaysia’s edging up from around to 4m hectares to just short of 5m.

Wong reckons the companies have little choice but to acquire land in Africa to boost their land banks, in spite of the higher risks of political and social instability, but nevertheless concludes that palm oil prices are likely to face upward pressure as demand outpaces supply.

For the moment, they are sitting pretty. Crude palm oil prices have slipped from their February high of more than M$3,900 to trade at around M$3,224 in Kuala Lumpur on Monday afternoon. But that still leaves the plantation groups making at least M$2,000 a tonne more than their costs of production.

That is translating into a big surge in profits. Singapore listed Golden Agri-Resources, Indonesia’s biggest palm oil producer, recently announced a 147 per cent rise in net profit to $1.4bn for 2010, despite being blacklisted last year by Unilever, Nestlé and Kraft Foods, the consumer products groups, following Greenpeace claims that it destroyed rainforest areas to plant oil palm trees. Golden Agri denies the claims.

With strong demand for edible oils likely to keep prices high, driven by rising exports to India and China, where prosperity is triggering dietary changes that are raising demand for processed foods, supply constraints could easily have a significant impact on prices over the next few years as the South east Asia land use deadline nears.

That is likely to drive further investment in equatorial Africa, one of the few places in the world outside south east Asia where the oil palm tree will grow. Sime Darby, which has a total of about 525,000 hectares in production, recently disclosed talks on acquiring 300,000ha in Cameroon, in addition to a lease signed last year on 220,000ha in Liberia. Golden Agri has identified a similar amount in Liberia; Olam has a 300,000ha joint venture in Gabon, and Wilmar recently acquired a Unilever plantation in Ghana.