Colonial-style land grabbing back on the table 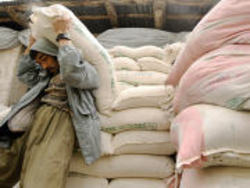 WASHINGTON, Apr 19, 2011 (IPS) - The highly-contested Principles on Responsible Agricultural Investment (RAI), a set of priorities that peasants’ collectives and food rights groups have been battling for years, are back on the table this week, as the annual Conference on Land and Poverty opened at World Bank headquarters here Monday.

RAI is "dangerously deceptive" for couching the act of annexing land in the language of human rights and corporate social responsibility, said Shalmali Guttal, a representative from Focus on the Global South.

"Corporations and governments will win, but local communities, eco-systems and future generations will lose; the takeover of rural peoples’ lands is completely unacceptable no matter what ‘guidelines’ are followed," Guttal stressed.

A number of organisations including the World Bank, the International Fund for Agricultural Development (IFAD), the U.N. Conference on Trade and Development (UNCTAD), and the U.N. Food and Agriculture Organisation (FAO) jointly formulated the RAI framework, which they describe as a ‘responsible’ means of acquiring vast tracts of farmland.

"You are all aware of the ingredients," Zoellick said told reporters, "take high food inflation, mix in price gyrations, and then stir in higher fuel costs, and you get a toxic brew of real pain contributing to social unrest."

While his comments have largely been met by nods of agreement and high praise from the international development community, protestors and rights- groups refuse to be silenced by what they believe to be empty rhetoric, and continue to speak out forcefully for the right of millions to food.

According to Ibrahim Coulibaly from the National Coordination of Peasant Organisations in Mali, "Land grabbing is banditry; it’s about seizing or taking over the only resource that poor people have left and giving it those who already have too much."

"The breaching of international human rights law is an intrinsic part of land grabbing," stated Sofía Monsalve from FoodFirst Information and Action Network (FIAN). "Forced evictions, the foreclosure of vast stretches of land for use by rural peoples, the blatant denial of information, and the prevention of meaningful local participation in political decisions that affect people’s lives are all human rights violations."

The principles are a set of non-binding suggestions for investors to consider before participating in large-scale land-acquisition, and are supposedly based on the possibility of a "win-win" situation for both private investors and impoverished peasants. They include broad notions that investments on land should be transparent, environmentally sustainable and strengthen food security rather than jeopardise it.

Farmers and community organisations have been struggling against the RAI principles, on the grounds that they mask shortsighted annexation by transnational corporations for quick profits.

GRAIN, an independent research organisation supporting community struggles, reported Monday that since 2009, the biggest proponents of RAI principles - pushing the agenda onward even while local communities resist - have been the European Union, the FAO, G8, G20, IFAD, Japan, Switzerland, the United States and the World Bank.

Investing in a Food Crisis

In his 2010 commentary ‘Responsibly Destroying the World’s Peasantry’, U.N. Special Rapporteur on the Right to Food Olivier De Schutter wrote that between 2006 and 2009, land equivalent to the total arable area of France was negotiated for sale - with millions of hectares passing from state or peasant ownership into the hands of Western investors including Wall Street banks and private hedge funds, entities that have come to view land as an investment safe haven in a time of financial turmoil.

De Schutter writes that initial attraction to large-scale land investment was born of the belief that beating hunger was dependent on increased food production and that paltry investment led to scarce supply, resulting in the conclusion that if investors could be lured to the agriculture sector, they should be encouraged to stay.

"Both [this] diagnosis and remedy are incorrect," De Schutter said. "Hunger and malnutrition are not primarily the result of insufficient food production; they are the result of poverty and inequality, particularly in rural areas, where 75 percent of the world’s poor still reside."

Fighting Through Earth Democracy
While blatant land acquisition remains a tough fight, the loss of natural resources due to less straightforward backroom deals at times presents a much more formidable foe.

At a time when the multilateralism of emerging markets has taken centre stage, locals in the Global South are up against not only transnational companies but also state governments that are hand in glove with international corporations.

"Five years since the government of India agreed to a 12 billion dollar deal with the South Korean Pohang Steel Company (POSCO) - which plans to set up a primarily export-oriented steel plant on the east coast of Orissa with a captive port, a captive power plant and a captive mine - the communities of this coast have been resisting," Vandana Shiva, the Indian environmentalist-philosopher, told IPS.

Locals have been resisting the deal on the grounds that they have a prosperous bio-diverse economy, where food is produced according to the needs of the people and where the laws of the land - under the decentralised democracy of Panchayati Raj as well as India’s Forest Rights Act - allow them to object.

While researching POSCO, Shiva found that since the Asian financial crisis the ownership of the company had passed largely into the hands of financiers like Warren Buffet and Goldman Sachs.

"So as a result of this so- called globalisation and multilateralism, what does democracy in India look like today?" Shiva asked. "The poor people fighting a company owned by Wall Street, refusing to give up their land, saying ‘we will face bullets, we will face killings, but we will not give up’."

"This is the global corporate world that ordinary people in local villages are facing, and they are facing it through what I call ‘Earth Democracy’ - links to the earth and fights where they are on the ground," she added.

"In the past, agricultural development prioritised large-scale, capitalised forms of agriculture, neglecting smallholders who feed local communities," he added.

"Since governments have failed to protect agricultural workers from exploitation in an increasingly competitive environment, it should come as no wonder that smallholders and agricultural labourers represent a combined 70 percent of those who are unable to feed themselves today," De Schutter concluded.

A joint statement was issued Sunday in honour of the International Day of Peasant Struggles by farmers, fisher folk, rights and research organisations, and collectives representing hundreds of millions of peasants from South Asia, Latin America and Africa. Over 50 million hectares of arable agricultural land, "enough to feed 50 million families in India", have, in the last decade, been snatched from farmers and placed securely in the hands of private, multinational and transnational corporations, the statement read.

High Quest Partners, a private strategy consultation firm working in the service of global food, agro- business, and bio-fuel companies, reported last year that global investment in farmland has hit 25 billion dollars and is likely to triple in the very near future.

"The food price crisis happened because of the commoditisation of food. RAI will legitimise land grabbing worse than in the colonial era," Henry Saragih from La Via Campesina, an organisation representing 200 million peasants worldwide, warned Sunday.

"One of the objectives of colonialism was to find and absorb the essential resources of the colonies," Saragih told IPS. "Control over oil, gas, and mining came later - control over food production was always a top priority."

The Network for Social Justice and Human Rights in Brazil expressed fears as to the impact of RAI policies on indigenous communities in South America.

"[It] will have a devastating effect in the Amazon and Cerrado by giving the green light for illegal activities of large cattle ranchers, agribusinesses, mining and lumber companies to destroy protected forests and biodiversity in food production by small farmers," the network’s representative Maria Luisa Mendonça said (END)