WB, UN and govts told to back off lands 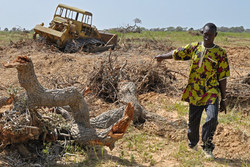 Accounts pouring in from Asia, Africa and Latin America reveal that local communities are being dispossessed as never before of their sole sources of food and livelihood security.

Dimapur, April 18 (MexN):  The World Bank, UN agencies and governments are criticized for promoting agricultural investments that are resulting in land grabbing on a massive scale. On International Day of Peasant Struggles, prominent farmers, fisherfolk, human rights and research organisations are demanding that the world bodies and governments engage in genuine argiculture reforms.

From 18-20 April, investors, government officials and staff of international agencies will gather in Washington DC for the Annual World Bank Conference on Land and Poverty to discuss how to operationalise a framework called Principles for Responsible Agricultural Investment  (RAI). Formulated by the World Bank, International Fund for Agricultural Development (IFAD), UN Conference on Trade and Development (UNCTAD) and Food and Agriculture Organisation (FAO), RAI consists of seven principles which investors may choose whether or not to abide by when conducting large-scale farmland acquisitions.

According to Henry Saragih from La Via Campesina, “The food price crisis happened because of the commoditization of food. RAI will legitimize land grabbing worse than in the colonial era. All sizes and types of land will be taken by TNCs; there will be no place for peasants, peoples and communities to live. This type of agricultural production is creating a way of life that is highly dependent on a few TNCs.”

“Large-scale land acquisitions are designed to open up new spaces for export oriented, industrial, plantation agriculture” said Henk Hobbelink of GRAIN. “There is no point in sanctioning that through any set of investor ‘principles’ or code of conduct. This is not an agriculture that feeds people in a just and sustainable way.”

Accounts pouring in from Asia, Africa and Latin America reveal that local communities are being dispossessed as never before of their sole sources of food and livelihood security. Reports indicate that at least 50 million hectares of good agricultural land – enough to feed 50 million families in India – have been transferred from farmers to corporations in the last few years alone. Investment brokers estimate that US$25 billion have already been committed globally, and boast that this figure will triple in a very near future. RAI will offer such large-scale land deals a cloak of respectability.

“RAI is dangerously deceptive” said Shalmali Guttal from Focus on the Global South. “Corporations and governments will win, but local communities, eco-systems and future generations will lose; the takeover of rural peoples lands is completely unacceptable no matter what guidelines are followed.”

“The breaching of international human rights law is an intrinsic part of land grabbing,” stated Sofía Monsalve from FIAN International. “Forced evictions, the foreclosure of vast stretches of land for current and future use by rural peoples, the introduction of models of land use and agriculture  that destroy natural environments, the blatant denial of information, and the prevention of meaningful local participation in political decisions that affect people’s lives are all human rights violations.”

“The new wave of land grabbing will have a devastating effect in the Amazon and Cerrado by giving the green light for illegal activities of large cattle ranchers, agribusinesses, mining and lumber companies to destroy protected forests and biodiversity in food production by small farmers and indigenous land,” said Maria Luisa Mendonça, Network for Social Justice and Human Rights, Brazil.

According to Ibrahim Coulibaly from the National Coordination of Peasant Organisations in Mali, member of La Via Campesina, “Land grabbing is state banditry; it’s about seizing or taking over the only resource that poor people have left and giving it those who already have too much, those who are already extremely rich. And that is not acceptable.”

The joint statement calls instead for a renewed focus on genuine agrarian reform and agricultural investment that supports small-holder farmers to produce on their own lands through agro-ecological means.