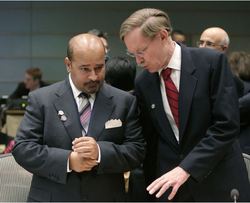 WASHINGTON, Apr 17, 2011 (IPS) - As weeks of what the International Monetary Fund's managing director Dominique Strauss-Kahn called "painful" negotiations over a host of macroeconomic policies drew to a close here Saturday, confusion over coherent strategies for sustainable economic recovery hangs thick in the air.

Highlighting the still-solid friendship between the finance ministers of the Group of 20 (G20) largest industrial and developing nations, and the biggest banking duo, the IMF and the World Bank, closed-door meetings about the management of huge global imbalances and inequalities produced what critics called predictable results.

The Wall Street Journal reported Saturday that G20 finance ministers and central bankers crawled closer to an agreement on reviewing the policies of seven of the world's mightiest economies – the U.S., Japan, Germany, China, France, the U.K. and India – in order to assess the extent and impact of their economically destabilising policies like outstanding government budget deficits and debt, high personal saving rates or big trade surpluses and deficits, a move thought to be aimed at anger over an undervalued Chinese yuan.

China – currently the world's fastest-growing economy, with a projected annual percentage increase in real GDP of nearly 10 percent by 2012 – has been at loggerheads with the U.S. over this review, calling it a "politically motivated move" intended to put a cap on China's growth.

Li Yong, China's vice minister of finance, claimed last week that "the issue of external imbalances is […] related to the development rights and growth potential of emerging economies and is another political tool, after the exchange rate, used by developed nations like the U.S. to curb China's development."

Despite micro quarrels over macro policies, the G20 leaders emerged satisfied that capital controls – which, from India to Chile, have failed to protect against asset bubbles and secure local currencies – remained solidly in place and with them, as always, the old neoliberal development agenda.

Following a few steps behind their biggest shareholders, the Development Committee – a forum of the Bank's and Fund's board of governors – held a press conference here Saturday to brief the public about the urgent need for "change", albeit in a framework that stays staunchly loyal to economic dogma.

Stressing the need for renewed focus on rising food prices and energy volatility, Development Committee chairman and Bahraini finance minister Mohammed Al Khalifa told the press that the World Bank Group "shared concerns over the world's most vulnerable populations" who were suffering the impacts of price hikes in basic foodstuffs and bearing the brunt of "overheating".

Echoing him, World Bank president Robert Zoellick warned that 44 million people have fallen into poverty as a result of rising food prices in 2011 alone.

"A further 10 percent rise in the food price index could put 10 million more into poverty this year," he said, adding, "In revolutionary moments, status quo is not the winning hand."

Officials of international financial institutions (IFIs) have this week reinforced their ability to jump on any bandwagon that offers quick profits, no matter how inconsistent their policies are with the real revolutionary changes unfolding across the globe.

Swarms of global organisations joined hands in the last week to protest the banks' decrepit policies, struggling to make their voices heard over the din of elites in "emerging markets" claiming a bigger stake in corporate-capitalism's pie.

Oxfam International's spokesperson Max Lawson said, "Leaders today claim the food crisis is desperately urgent, so urgent they will act on it at their next meeting in June - that's 66 days away. Nearly half a million children will have died of hunger by then."

Lawson added, "The World Bank says we're one shock away from a full- blown crisis but makes no mention of the three things rich countries have done to cause it – burning food for biofuels, gambling in commodity casinos, and subsidising farmers in rich countries."

Thousands of activists rallied outside the Spring Meeting headquarters here on Friday to demand that the World Bank "stop fossil fuel lending and focus funding on clean, renewable energy access for the poor," protesting that Bank lending for fossil fuel projects rose 400 percent between 2006 and 2010.

The action came right as the World Bank's current Energy Strategy is under review. Thus far the strategy has led to very controversial projects, including, most recently, last year's 3.75-billion-dollar loan to a massive coal plant in South Africa.

While John Lipsky, first deputy managing director of the IMF, was calling meekly for sustainable employment schemes and job creation, the Bretton Woods Project was busy crunching the numbers of the World Bank Group's International Financial Corporation (IFC), a branch armed with nearly 18 billion dollars, which has been relying increasingly on local financial intermediaries such as banks and private investment funds, plying them with over half its annual project commitments.

The Bretton Woods Project report found that the IFC has a long, continuing track record of financing primarily a select few projects of large transnational partners, a near total absence of transparency and little evidence to support the claim that it supports micro- enterprises or small- and medium-sized businesses, proving that the call for job security does not square with the neoliberal agenda.

Meanwhile, a press release issued by an immense coalition of peasant collectives and land-rights organisations Sunday stated that the Annual World Bank Conference on Land and Poverty happening here this weekend would likely sign thousands of hectares away from farming communities into the hands of industrial corporations.

According to Henry Saragih, an organiser of La Via Campesina, a collective representing over 200 million farmers from South Asia to Latin America, said, "The food price crisis happened because of the commoditisation of food. The World Bank's Principles for Responsible Agricultural Investment (RAI), being discussed in Washington this weekend, will legitimise land grabbing worse than in the colonial era."

The joint statement called for "a renewed focus on genuine agrarian reform and agricultural investment that supports small-holder farmers to produce on their own lands through agro-ecological means," standing in direct opposition to financiers' claims that revolutionary change can be triggered by minute macroeconomic reforms.