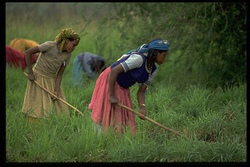 
Lusaka: Foreign investors have dominated the 16 bids received by Zambia Development Agency for development of Nansanga Farm Bloc in Serenje. Of the 16 applications received, only six were from Zambia while the rest were from foreign investors. Government invited applications for the pre-qualification to participate in the acquisition of agricultural land in the Nansanga Farm Bloc for the purpose of developing an agribusiness core venture and three commercial farms.

The foreign firms include Sea Agriculture, Equator Investment and Chayton Capital all from the UK. Others are Crookes Brothers from South Africa, Polyserve Fertilisers and Chemicals of Egypt, Bonafarm group of Hungary, Pro Alia Investments of Mauritius, Scipio of Switzerland and Yuan Longpin Hightech agriculture from China.

ZDA manager for privatisation Henry Sakala said the agency was looking for investors who would not go to speculate on Zambian land but those with a long term plan. “The concept of the farm block will change the landscape of farming because we have left spaces deliberately for commercial and social purposes. The farms at the farm bloc are expected to have an outgrower scheme. This is good for the development of the country,” Sakala said.

He said the Nansanga Farm Bloc was one of the critical farm blocs that the government had put up for development. “This is just one of the many farm blocs that will be developed. It is just the first of the nine farm blocs we have around the country,” Sakala said.

And deputy director for technical services at the ministry of agriculture Henry Sichembe said the ministry was working with the local authority to plan on how to meet the demands as the farm bloc developed.

Sichembe said there were specific areas left out within the farming bloc, which were meant for planning as activities increased in the bloc. “Of course we expect demands for social activities to rise as the farm bloc develops. We have areas meant for schools, clinics and other social needs,” Sichembe said.