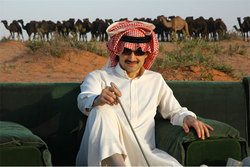 Saudi Prince Alwaleed bin Talal, the richest man in the Middle East, had a grand vision for turning a swath of land in southern Egypt into an agricultural marvel. Now that land has become part of a political struggle, in the wake of the overthrow of former President Hosni Mubarak.

Since 1998 Alwaleed has invested $127 million in 100,00 acres (40,470 hectares) of land in the Nile River delta Tushka agricultural project (also known as Toshka). The land is owned by Alwaleed’s Kingdom Agricultural Development Co., which is part of his Saudi-listed Kingdom Holding investment vehicle. Egypt’s public prosecutor’s office said Sunday it froze the land controlled by Alwaleed because the original sale of the land violated the law, Reuters reported on Monday.

A new report today quotes Egypt’s state news agency MENA as saying that Alwaleed gave up his claim to the the contested land. Alwaleed reportedly did not want to enter international arbitration over the ownership rights to the land. My calls and emails to Alwaleed’s spokespeople in Riyadh were not returned.

Forbes warned in February that the uprising in Egypt might have a spillover effect on billionaires with investments in the country (see Entangled In Egypt). Given the prosecutor’s clear effort to go after Mubarak’s alleged billions of dollars in assets (or, more unlikely, hundreds of billions of dollars of assets), it’s not surprising that the prosecutor is investigating deals cut by the Mubarak regime as well. It seems unlikely, however, that Alwaleed would so quickly give up the land in Egypt.

There is very likely more to be revealed regarding this dispute. Stay tuned.