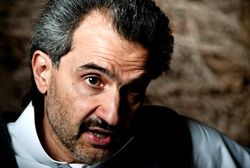 
Egypt's public prosecutors' office said on Sunday it had frozen land in southern Egypt controlled by Saudi billionaire Prince Alwaleed bin Talal because the original sale of the land violated the law.

The public prosecutor has been investigating business transactions and the finances of officials under Hosni Mubarak since mass protests forced him to resign as president on February 11.

The land, owned by Alwaleed's Kingdom Agricultural Development Co (Kadco), is part of the Toshka desert project to pump water from Egypt's Aswan High Dam reservoir and deliver it via a 50 km (30 mile) canal to reclaimed agricultural land 60 km from the Sudanese border.

"Investigations revealed that ... the contract contained unknown provisions that violated the law and gave the company  unjustified benefits," the public prosecutor's spokesman, Adel Al-Saeed, said in a written statement.

The spokesman said Alwaleed's contract violated Egyptian law because the area Kadco bought was twice the legal limit and because it improperly exempted Alwaleed's company from all taxes and fees.

The contract was signed on the Egyptian side by former Agriculture Minister Youssef Wali, and Saeed said on Sunday that Wali's assets had also been frozen.

The contract also granted outright ownership of the land once the company completed payments, in violation of rules stipulating that the land must be completely reclaimed and planted within five years, Saeed said. - Reuters