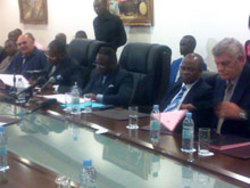 POINTE-NOIRE, Congo, Mar 26, 2011 (IPS) - In the hope of strengthening its agricultural production, the Republic of Congo has handed over 80,000 hectares of arable land to a company owned and operated by 14 South African farmers.

"Our country is experiencing a food shortage and to resolve this problem, it is necessary to make land available to agricultural operators who are also investors. It’s the new policy and we’re going to continue with it," says Rigobert Maboundou, Congo’s Minister of Agriculture and Livestock.

An agreement signed on Mar. 10 in Pointe-Noire, the Congolese economic capital, the group of South African farmers and their jointly owned company, Congo Agriculture, handed over 63,000 hectares of land at Malalo II and an additional 17,000 hectares at Dihesse, in the south-west of the country. According to the agreement, the South Africans are going to set up a food processing industry in Malolo II, which should also create employment.

"Congo has been waiting for this kind of investment initiative, the creation of jobs and most importantly, an abundance of food, because these farmers are going to grow food-producing crops and farm livestock," says Pierre Mabiala, Minister of Land Reform, who handed over the title deeds.

The land handed over to the South Africans in Malolo II and Dihesse was occupied by smallholder farmers relying on traditional agricultural methods.

"I was shocked when the people from the government told me that I had to move off my cassava and groundnut field," says Jean Mbenze, a peasant farmer from Dihesse.

"It’s about access to information," says Christian Mounzéo, president of the Pointe-Noire-based NGO, Conference for Peace and Human Rights. "Why is this issue of dividing up the land not made public, leading to national debates that would allow people to engage with each other, rather than just deciding without consulting the affected communities?"

The eviction of farmers to make way for the Congo Agriculture concession is added to growing pressure on others who grow food to supply the country's urban centres.

"Here in Pointe-Noire (in the south-west) we don’t have any more land for market gardens, as it’s been sold so that buildings can be put up. We bring in carrots from Dolisie (160 kilometres from Pointe-Noire) sold at 1,500 CFA francs (about three dollars) a kilogramme, which we resell at 2,000 francs," Clementine Mpaka, who used to farm at Ngoyo, which has now become a built-up area of the city.

"It’s the same in Brazzaville, where the market gardening strips along the Congo River, in the Mpila city district, – though protected by the state – have been divided into plots for buildings," says Kevin Mviri, from the Association for Human Rights and the Prison Environment. He condemns the beatings that have been inflicted on these peri-urban farmers by the men in power who have bought up their land.

"Nobody assists them, and the state graciously hands over this land to a bunch of strangers."

Not exactly a breadbasket

Around 100,000 small farms are the basic livelihood for many Congolese families, though their output barely makes a dent in the country's food requirements.

According to the Food and Agricultural Organisation (FAO), of the 10 million hectares of arable land in the country, the Congolese only farm two percent. This is why, according to the International Food Policy Research Institute, 21 percent of Congolese face serious food insecurity.

The government still spends 60 million dollars on food imports every year, according to official statistics.

The small farmers are displaced to make way for more productive operations, as in a project launched in 2010, in Moulende, where the U.S.-based NGO International Partnership for Human Development (IPHD) is currently harvesting 1,300 tonnes of maize.

"We are all winners in this, as the government is no longer having to import this food from outside. We are also going to supply school canteens and produce cattle feed," Christian Bana, head of IPHD in the Congo, tells IPS.

"We just need some goodwill and resources, now that we have the workforce in place, and we will have great harvests, like the IPHD’s. We are looking for more companies and initiatives this," Maboundou says.

Between 2011 and 2015, the Congo is projected to invest 80 million dollars on agriculture, a negligible figure held against its current budget of roughly six billion dollars a year. The government says that new agricultural villages, with a potential output of 2,000 tonnes of cassava per year, and around 2,500 eggs per day, are being set up.

"There’s more to it than just calling on South African farmers who can bring their experience in agricultural development. We mustn’t forget that our participation in the national agricultural development project requires the provision of a wide range of inputs and forms of support to our farmers, before bringing in foreign companies," says Mounzéo.