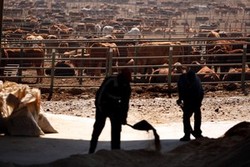 
Democratic Republic of Congo, Malawi and even the former Soviet state of Georgia are just some of the countries to which South African farmers are fleeing to escape harsh farming conditions, compounded by a government they say is making their jobs "unbearable".

From 120000 in 1994, only 37000 commercial farmers remain, which has led to the country teetering on the brink of becoming a net importer of food.

Farmers blame "unreasonable" laws, unionisation of farm workers, expensive water, electricity and other necessities, a shrinking supply of arable land, and the threat of land reform as reasons for farming in South Africa becoming unsustainable.

As a result, agricultural experts say the country is now starting to import grains such as wheat, which used to be supplied locally. The country is on the brink of having to import meat and poultry, which is being produced less and less locally.

In the past decade, 2000 commercial farmers have left and established themselves in Mozambique, the Democratic Republic of Congo, Botswana, Malawi, Lesotho, Zambia, Swaziland and Georgia.

Another 40 farmers visited the DRC last month and signed agreements to lease 80000ha of land to farm maize, beans, vegetables and other crops.

Farmers believe that the latest threat, the New Security of Tenure Bill, which is up for public comment, will be the last straw that will drive many more from the country.

The bill, said Andy Tladi, one of the farmers who will be leaving for the DRC later in the year, gives farm workers a "blank cheque" to do whatever they want to do on land that doesn't belong to them.

"The bill is going to worsen the situation for farmers. You are actually going to see workers putting up villages on farms. If you allow 10 people to build houses on a farm, in about 20 years you could have up to 30 families. So how does the farmer continue to grow and invest under those circumstances? I am a black farmer and I won't be able to handle that. A lot of farmers will fly out of the country," he said.

Kobus Badenhorst, who already farms out of Boane in Mozambique, said "labour is cheap here. I'm enjoying it here, there is no crime, no murders, no theft and there is no need for high security. It's not nice to hear that a farmer you know has been murdered because of R5."

Another South African farmer based in Goba, Mozambique, Lance Spear, said he left the country because of the unavailability of affordable arable land.

"Workers get kicked off farms and dumped along the side of the road. The Land Tenure Act and the Extension of Security of Tenure [Act] were found to be toothless - eviction continued unabated. We decided to tighten the new bill in order to give farm workers rights. By the way, we also extended those rights to land owners."

He said the bill was not cast in stone and would be reviewed if necessary.

"It is meant to create democracy, peace and stability on the farms," he said.

He said the government was aware of the exodus of farmers and had initiated recapitalisation and development strategies to support emerging farmers to become commercial. "We want to stop the exit of farmers, this is one of our strategies to contain the flight of our farmers. In five years we will be on top of the game," Mxotwa said.

AgriSA vice-president Theo de Jager said in the early 1990s there were about 120000 large and medium-sized commercial farmers in the country. However, by the end of last year, the figure had shrunk to 37000.

"We are increasingly becoming dependent on imports for certain commodities. Five years ago we had a thriving tea industry in South Africa; today we have nothing. We import from Kenya and Uganda. We are no longer self-sufficient in grains like wheat, we can't produce it profitably in South Africa. We used to be self-sufficient in wheat and we used to export it. It has become cheaper to import it than to produce it ourselves."

However, Andre Jooste, markets and economic research centre senior manager at the National Agricultural Marketing Council, said farmers across the world had to restructure their businesses in 1995, when agricultural markets were liberalised. "Subsidies were taken away, tariffs were liberalised and barriers were lowered."

South African farmers took a further knock in 1997, during the introduction of the New Agricultural Products Marketing Act. The Act deregulated the sector by "removing agricultural boards, which set tariffs, removing of surplus schemes opening up the sector into a free-market system. All these combined made the agricultural environment difficult to operate in."

The squeeze, said Jooste, has become more evident in recent years. "Production costs are rising more rapidly than products themselves."