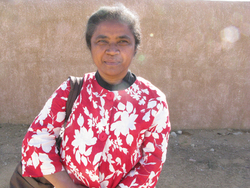 In Madagascar grassroots struggles against corporate-driven land grabbing have emerged as a political point of focus in the growing global spotlight on land grabs throughout the global south, a process that the U.N. special rapporteur on the right to food says has “negative effects on the right to food as well as other human rights.” Mass scale corporate land occupations are expanding throughout Africa, and Madagascar is an example of the intensity of the corporate push for national lands but also on the ability for communities to resist such land grabbing.

Mamy Rakotondrainibe is a key activist in the Collectif pour la Défense des Terres Malgaches and explains the struggle against land grabbing in Madagascar, specifically highlighting the ongoing struggle to cancel an agreement involving the Korean corporation Daewoo Logistics and 1.3 million hectares of national lands in Madagascar. Mamy spoke to Montreal writer and activist Stefan Christoff at the World Social Forum in Dakar, Senegal, in February 2011 for farmlandgrab.org

Stefan Christoff: Today we are at the World Social Forum in Dakar, Senegal, you are participating in this global event to highlight grassroots struggles in Madagascar against corporate land grabbing, wondering if you could introduce yourself and the organizing work that you do?

Mamy Rakotondrainibe: Thanks for the opportunity to introduce our organization Collectif pour la Défense des Terres Malgaches and our activities to defend Madagascar lands. In 2009 we started the collective following the announcement that Daewoo, a Korean corporation, was involved in a major land grab in Madagascar. The project was clearly not acceptable so we decided to struggle.

A corporate representative from Daewoo announced that they signed a contract for 1.3 million-hectares of lands with the Madagascar government to be leased for 99-years without any kind of real financial compensation for the people of Madagascar. 1.3m hectares which was to be used mainly for corn and oil palm crops for biofuel markets, the majority of products produced on the lands were to be sent to South Korea and internationally, not staying in Madagascar.

Actually the area impacted by this contract was so massive for Madagascar that we could not stay silent.

Major protests took place in Madagascar against this contract and finally the deal with Daewoo was put on hold due to public outrage, we are still trying to confirm the actual cancellation in writing from the government. It is possible that today Daewoo is working under the name of a Malagasy company. Also the South Korean government is financing many 'cultural' activities now in Madagascar, even in the diaspora in France, that could work to the advantage of negotiating Korean corporate land grabbing later on. Basically the contract is on hold due to major opposition and protests in Madagascar however we are struggling to confirm this news.

Rakotondrainibe: Concerning land tenure in Madagascar, we had national laws prohibiting corporations or people from abroad from buying lands. However in 2003 the law was changed and now foreign companies can purchase our national lands in Madagascar in collaboration with a local company. In fact this legal change in Madagascar happened under the pressure of the World Bank and IMF in the name of economical development policies.

Only a small part of the population has official land titles because traditional people have no official documentation of land ownership and getting documentation of land ownership is a long and bureaucratic process not generally known to people. Also the cost of obtaining official land title papers was really high, hundreds of dollars, a huge amount in Madagascar. This made getting official land title papers inaccessible for most people. Also in law most of the lands belong to the government in laws written after colonization, although these lands were community lands, collectively owned, so now the government is contracting the land without consent of the indigenous people on the lands.

Actually most negotiations on land grabbing in recent years have been performed in secret. People in Madagascar generally do not know about the deals taking place and most information is learned from newspaper reports from abroad. At this point it is impossible to know which part of Madagascar is sold or leased away.

The main point of context to understand in relation to the land grabbing process in Madagascar is the poverty of the population in Madagascar. Many people live in villages and on farms, struggling to survive, just producing enough to eat, for their survival. So when a corporation or someone proposes to invest in lands, often out of economic desperation, people sometimes sign-on. Also often the people, living on the lands for generations, are not even aware or informed on their lands being contracted out by the government.

Christoff: Can you speak on the reality of land ownership in Madagascar, understanding that a huge part of the population maintain a traditional relationship to the land, as peasants, as people living off the land in Madagascar for generations, people who may not officially own the land but relate to land as an important part of their history and their community survival. Wondering how this current land grab in Madagascar, huge parts of the country sold-off to corporations, impacts people and communities?

Rakotondrainibe: In Madagascar lands are considered sacred and people are really attached to their lands.

The problem today is that because it is difficult for people to obtain documentation of land ownership very few people can legally defend their historic land ownership. Also lands in Madagascar are operated under laws influenced by the colonial system, so significant land areas are called colonial concessions, lands owned by the state. So people who have lived on the land for generations are not able to obtain official documentation of land ownership because they are considered 'state lands'.

In 2005 a land reform program was initiated, lowering the price to obtain official land documents and allowing local authorities to issue land certificates. So this is a positive development and some people got certificates but actually the land areas covered by this process are limited because it doesn't apply to most state lands which are actually traditional lands.

So given this situation we have a great deal of land conflicts in Madagascar, often between people living in the country and multinational corporations.

Christoff: Can you talk about what this land grab means for the people of Madagascar economically, this trend of corporate land grabs, in regards to the economic independence and self-determination of communities across the country.

Rakotondrainibe: Every time that foreign corporations move to take lands in Madagascar the reaction of local communities is always to try to protect their lands, but the power relationship is not equal in this battle and we have news on local struggles against land grabs in Madagascar from across the country. Also people are sometimes scared to speak-up because it is rural people vs the government and foreign corporations who are often using violence.

In the case of Daewoo corporation from South Korea, many people in Madagascar were silent on this issue at the beginning because a few years before, people had protested against a land conflict between peasants and a rich Malagasy family and the government sent out the military. As soon as the Daewoo deal was known, a customary chief of one East region that would be impacted organized a press conference about it. As only a few newspapers published the interview, his friends distributed copies of the article but had to stop quickly because of threats from the local authorities. Actually the land deal with Daewoo corporation was one of the major points of the 2009 protests against the Madagascar government of Marc Ravalomanana, now exiled in South Africa. And under the new government of Andry Rajoelina, the negociations on lands seem to happen more at the regional and local levels, but transparency remains a big issue.

Christoff: So communities are actively struggling against this land-grabbing process but are facing repression. Can you provide more context?

Rakotondrainibe: Yes people are struggling but are often scared to speak-out, so news on land grabs in the rural areas passes slowly person-to-person.

People in Madagascar actually have little information outside their immediate communities, activists have been distributing information throughout the country and local authorities are trying to stop activists from distributing photocopied articles explaining the Daewoo case and other cases, actually people distributing the article were threatened with arrest.

So then activists worked to bring the struggle outside the country, they contacted activists in Europe to start working on the land grab issue. So Collectif pour la Défense des Terres Malgaches was set-up to address this issue because the people in Madagascar face a great deal of repression when struggling against land-grabbing.

Basically authorities and corporations claim that large parts of Madagascar lands are empty, while in reality there are many people who use the land traditionally, living off the land in modest ways. Poor rural people represent a large part of the population in Madagascar and it is these people who are facing the loss of land. Corporate land grabbing threatens these people with loosing their lands, their livelihood and ability to survive, after contracts are signed they will be left with nothing.

Christoff: Some argue that this is a positive process for economic development in Madagascar due to poverty, what would you say to this argument?

Rakotondrainibe: This is the argument that some rich people in Madagascar and a few farmers say, but that is because they want immediate investment and are not thinking about the long-term or middle-term consequences and this is why we are actively explaining the consequences of land-grabbing.

Christoff: We are sitting in Dakar, Senegal, for the World Social Forum (WSF). You have travelled here to communicate to people the struggle against land-grabbing in Madagascar. At the WSF many people are talking about the issue of land-grabbing in different countries around the world. Wondering if you could reflect on how land grabs in Madagascar point to broader trends throughout the global south? How important is it for people to understand the Madagascar struggle in relation to other land grab struggles around the world?

Rakotondrainibe: At the World Social Forum we have had the opportunity to speak to many people about our struggle against land-grabs in Madagascar. Actually a document from the World Bank points to Madagascar as the second-most impacted by land grabbing in Africa, so it is important for people to know about our experience.

In Dakar we have connected with many farmers organizations from across Africa who were struggling and organizing against land-grabbing, very well aware of the negative consequences of land grabbing, so it is critical for us to build these links.

So as people from Madagascar in Dakar at the WSF we will work now to inform people directly in Madagascar, people impacted by land grabs, that this is now a global issue that is impacting people around the world. In our struggle solidarity is important and for people in Madagascar to know that in other countries people are organizing and fighting against land grabs gives a boost.

Stefan Christoff is a Montreal based community activist, writer & musician who contributed this interview recorded in Dakar, Senegal to farmlandgrab.org Stefan is at http://www.twitter.com/spirodon/