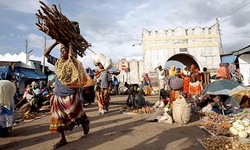 The market at the Shoa Gate, one of six gates into Harar. The Ethiopian government says new roads provided by large companies give small and medium-sized farms improved access to markets for their crops. (Photo: Robert Harding Picture Library L/Alamy)


by HE Berhanu Kebede, Ethiopia's ambassador to the UK

The Ethiopian government's absolute prime concern is ensuring food self-sufficiency at both national and household level. The first has already been attained and we are now working towards the second. Eighty-five per cent of Ethiopia's population of 80 million are smallholder farmers who, over the past 20 years, have benefited from agriculture extension packages that have vastly improved their productivity, to the extent that food production has risen exponentially; there are now even millionaire farmers. Surpluses are sold on Ethiopia's modern Commodity Exchange and are available for areas where there is a food deficit. As a result, far fewer people now rely on food supplements – 2.8 million, down from 5.2 million in the past year.

It is essential that, parallel to its activity of scaling up the productivity of small farmers, Ethiopia must develop large mechanised agriculture to increase food production and enable the agricultural sector the crucial role it is expected to play in the implementation of our five-year Growth and Transformation Plan. The government has put aside 3 million hectares (7.4 million acres) of land for this purpose of which, so far, 300,000 hectares have been leased to companies, both Ethiopian and foreign, so they can grow food crops for local sale and for export. Ethiopia has 76 million hectares of arable land in total so this potential 3 million hectares is a relatively small amount of the total. So commercial farming is supplementary to farming by small-holders.

Government experts have studied the land, the soil structure and the impact of mechanised farming. Environmental impact studies are carried out by our Environmental Protection Authority, headed by world-renowned ecologist Dr Tewolde Gebre Egziabher, and we lease out land – land is not sold but leased – according to what investors want to grow, matching the land to the crops. It is important to note that land allocated is not currently under cultivation by small-scale farmers and has, until now, been inaccessible for agricultural use, especially in the lowland areas. By the nature of the magnitude of these commercial farms the new social and physical infrastructure they bring is of great importance to the community and to the country as a whole.

The Indian company Karuturi Global informed us of the sort of food crops they wished to grow and we allocated land accordingly. The company will be selling some of their production in Ethiopia, helping to close the food shortage gap, and exporting the rest. Investors must ensure not only that the land they are allocated is efficiently managed, but that they will construct housing, roads, schools, clinics and other infrastructure such as a water supply, to fully support their workers. It is clear, therefore, that it is the Ethiopian government which has spearheaded this policy, not foreign investors. Investors such as Karuturi Global bring huge benefits. Not just the jobs, houses, schools, clinics and other infrastructure mentioned above, but knowledge transfer, skills training, tax revenue and other benefits to the workers and to the country as a whole. The improved access that large companies bring benefits small and medium-sized farms who can more easily get their crops to market on the new roads.

The phrase "land grab" implies that wealthy foreign investors are misappropriating land and that Ethiopia has no control over the process. In fact, Ethiopia chooses to allocate land to investors depending on best use. The key is to achieve balance. Commercial farms tend to become hubs that link smallholders to value chains and help spread knowledge and best practice to other farms. So the debate is not about big versus small. We will continue to support commercially viable small farms, which offer increased food supplies, jobs and incomes in both the farm and non-farm economy. This will help Ethiopia achieve wider economic development and prosperity.

Ethiopia is determined to counter the effects of climate change, which impacts unfairly on developing countries' food production. We have planted more than 1 billion trees in the past four years and will reforest 15 million hectares of degraded land as part of a climate-change and renewable-energy plan to become carbon neutral by 2025.

In view of rising world food prices, Ethiopia has embarked on sound economic, social and ecological measures, which enable efficient and effective use of all our resources. Ethiopia has to become self-sufficient in order to cushion itself against future world food shortages and worldwide export blocks in times of shortage.