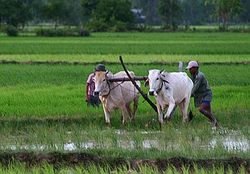 
This week the three day international conference on Global Land Grabbing will start in Brighton, United Kingdom. The issue of land grabbing has been on the agenda for some years now, but it seems to me that the academic focus is changing. This is my conclusion on the outcome of the “The Global Land Rush” seminar that took place on 24 March at the Utrecht University, the Netherlands. Two years ago the discussion was solely about the impact of large-scale land acquisitions of Gulf States in Africa to secure their food production and the concern with the bio-fuel expansion in prime agricultural areas in developing countries.

The rationale for the discussion arose from the outcome of local impact studies in Russia, Senegal, Cambodia, Vietnam, Indonesia, Congo and countries in West Africa. One of the general conclusions of these impact studies is that land speculation is one of the drivers of land acquisition, with the consequence that large areas of land are often not cultivated. Furthermore land acquisitions by foreign investors are just a small part of all large-scale land acquisition in most countries owing to the growing domestic urban elite, which is in a rush to buy land.

In Senegal, researcher Mayke Kaag said that the traditional power balance where traditional spiritual leaders solve land conflicts is threatened because of the new and formally obtained large-scale land acquisitions of outsiders. The new land rush empowers official local authorities. In the north of Cambodia incoming investors rapidly reduce areas inhabited by indigenous people, which can no longer be used for their traditional way of living. Researcher Guus van Westen pointed out the fact that although investors bring money into the area, local opportunities for indigenous people are nil. Workers from other parts of the country not only get the best jobs, but also tend to occupy parts of the land for their own purposes – reducing the territory of indigenous people even more.

But large-scale land acquisitions by foreign investors aren’t only threats to traditional cultures and values. In Indonesia, huge portions of land are converted rapidly into palm oil plantations. The change to non-food crops is an economic choice (also made by small farmers) but as a result, food insecurity is on the rise. Palm oil can be used for bio-fuels, the popularity of which is driven by the climate change agenda. Researcher Paul Burgers has also shown that this climate change agenda fuels conflicts in Vietnam, where large-scale land acquisitions for reforestation and national parks limit local farm communities’ use of their land.

How to turn these investments into benefits for local people? Is there any reason to suggest there is a spill-over effect of knowledge that can trigger modernisation impulses for local farmers? Yes and no says the 2010 World Bank report Rising global interest in farmland. This highly ambiguous report remains supportive of large-scale land acquisitions in developing countries by foreign investors, despite highlighting significant risks for vulnerable populations. There is a potential for a spill-over effect that can be used for the good, the World Bank says, but land investments have very often failed because of a lack of management.

The dogma in international economy remains that foreign investments are intrinsically good for development. But, like the study in West Africa by SNV Netherlands that researcher Joost Nelen presented at the seminar, most local impact studies on global land grabbing show that a modernisation impulse for local farmers or communities does not exist. New investors often aren’t more productive than traditional farmers, although this is often ignored by local authorities to defend land grabbing.

The SNV study and many others show there is no spill-over in the West African context. For that reason it would be interesting for the global land rush discussion to become part of the foreign direct investments (FDI) agenda. The idea that any FDI are intrinsically good for developing countries’ economies needs some fresh air.

But more importantly, are we speaking of a really new issue? The problems seem to have stayed the same for many years from the perspective of the poor. For them – on the local level – it’s the same struggle for land: they will hardly see the difference. That was a critical African voice from the audience during the Utrecht seminar. He criticised the West for the hypocrisy of putting the global land rush on the agenda as a problem, at the same time as emerging powers fast buying up land in developing countries has become a reality. Isn’t it odd, he said, to see these investors as a threat for Africa, when for decades European and American investors could buy land without any problems and without any discussions.

The Utrecht seminar had an interesting focus on the local impact of the land rush, but more attention is needed in the political and economic context of global land grabbing. The positive thing is that this will be discussed intensely at the three day International conference in Brighton that starts on Wednesday 6 April.

Evert-jan Quak is editor of The Broker Magazine.