Local farmers must not be forgotten in global land rush 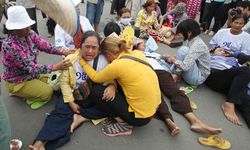 MDG : Land grabbing : Boeung Kak lake, Cambodia Residents of the Boeung Kak lakeside during a protest in Phnom Penh, Cambodia against eviction. A local developer and a Chinese investment company have been given a 99-year lease from the Cambodian government to develop the lake. Photograph: Mak Remissa/EPA

From Ethiopia's lowlands to the hilltops of Madagascar, hundreds of thousands of acres of farmland in the developing world are being gobbled up by investors creating super-sized farms.

This high-stakes global land rush, which has the potential to transform, for good or ill, developing nations, is essentially a third wave of outsourcing.

The first wave, in the 70s and 80s, sent manufacturers scrambling to lower-wage countries; the second involved white-collar service jobs primarily to India and other English-speaking, low-wage countries.

This third wave has sent investors, eager to capitalise on rising food and energy prices or shore-up their own country's food security, to lease or buy huge tracts of cheap land in the developing world.

Already, about 2.6 million hectares in soon-to-be-independent southern Sudan has been leased or acquired by international investors. An additional 2.5m hectares has been acquired in Ethiopia, Ghana, Madagascar, Mali and Sudan. Some nations, including Madagascar and Mozambique, have received requests from investors for more than half of their cultivable land area.

Emerging economies must proceed with caution. In this global "land rush", governments in much of the developing world confront a crucially important choice: will they proceed with a sustainable agricultural development strategy that benefits all of their people? Or will they settle for narrower, more immediate gains that actually cause harm to local communities?

The initial indications are not promising. Many of the deals approved by developing country governments are not the product of a fair or transparent process. Some threaten to undermine the food security of the host country. Many threaten to undermine the land rights and livelihoods of local communities. Few offer adequate compensation – in the form of equivalent land or cash – or suitable alternative employment for the displaced local farmers.

The stakes are high because more than 75% of the world's poorest families subsist in rural settings. More than 1 billion of these people have little or no legal control over the land they till. If meaningful gains on global poverty, hunger and food security are to be made, governments must to do more to accelerate legal land rights for their citizens.

Most governments recognise this, at least on paper. But untitled land is easily confused with "empty" land, which makes way for an attractive investment for corporate interests. In reality, land – particularly productive land – is rarely empty or unused. Poor and marginalised people typically have legitimate, long-standing traditional claims to such land, although these are often not reflected in public records.

As a result, these land deals often require the involuntary displacement of huge numbers of small farmers. The displacement common in these arrangements leads to increased poverty and potentially to social unrest, which can spoil the investment and even destabilise the government.

In most poor nations, there are large gaps between actual and potential agricultural yields. But the best route to closing this gap usually is not super-sized farms. In most labour-intensive agricultural settings, small farms are more productive than large farms. They could become even more productive – and as a result likely minimise unrest – if developing country governments provide these family farms with secure land rights that allow farmers to invest in their own land and improve their harvests.

Understanding and respecting the plight and rights of smallholder farmers is essential if investments are to be socially legitimate, legally secure and economically viable.

Indeed, the key to successful long-term, sustainable agricultural investments is to align incentives so that, if one party succeeds, all parties succeed. To achieve this "win-win-win" outcome, governments should insist that investors invest in the local farmers, not just the farmers' land. This can be done in a variety of ways, but the local farmers and their communities must be partners in the process – not simply moved off their ancestral land, with or without compensation. Local farmers, if not a part of a project's success, are likely to find a way to be a part of its failure.

• Darryl Vhugen is a senior attorney and land tenure specialist with Landesa, a non-profit organisations that has advised and partnered with government departments and other groups in more than 40 countries to help extend secure land rights to the rural poor