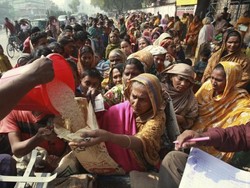 Urban poor queue up to purchase rice being distributed by the government at subsidised prices in Mirpur, Dhaka, Bangladesh, January 2011.

The foreign ministry has cleared the way for Bangladeshi entrepreneurs to invest in farming sector in the vast and untapped rural expanse of Africa, said an official Tuesday.

The teams headed by Mijarul Quayes visited Liberia, Ivory Coast, Senegal and Ghana and now foreign ministry wants the Bangladesh Bank and the agriculture ministry to take up the case for overseas farming.

"Bangladeshi entrepreneurs can invest in rice, wheat, cotton, coco and coffee farming in Africa. We want them to go fast before investors of other countries arrive," said a senior foreign ministry official.

The government sent the fact-finders in August and September last year as part of its efforts to ensure food security for the country's fast-growing population.

The country has been losing arable land to realtors and non-farm sectors at a very fast rate and under such circumstances, the government has been looking for alternative sources for food production.

Under the plan, the authorities would like the agro-investors to take substantial areas of largely unused farm land in Africa, on lease and bring back at least half of the output to Bangladesh in line with government-backed deals with the host countries.

"Already Chinese farmers have invested heavily in farmland in a number of sub-Saharan African nations. They are backed by their government. Some Middle East nations also made similar moves," said the official.

The official is familiar with the fact-finding missions and their recent reports. He was speaking on condition of anonymity as he is not authorised to speak to media.

"Two Bangladeshi investors have already scoured Tanzania, Gambia and Ghana to take on lease land for rice farming," he said, adding the government was "willing to cooperate with them in every possible way."

But unless they get foreign exchange clearance from the Bangladesh Bank, it was not clear how they would take land abroad under leasing arrangement, another official added.

Haideruzzman, an owner of Best Air, said he had taken 250,000 acres of land on lease in Tanzania and Ghana. But foreign officials have disputed his claims, saying they are not aware of any such deals.

Bangladeshi textile millers who have now emerged as one of the world's largest cotton consumers, have visited Mali, Ghana, Ivory Coast, Lesotho and Burkina Faso to scale up import from some of the top cotton producers in the world.

Unlike China and India, Bangladesh imports the whole quantity of its required cotton from abroad and is extremely vulnerable to price volatility. Uzbekistan, India and the United States have been the main import sources for them.

But a record-breaking jump in international cotton prices prompted the local textile millers to explore opportunities in Africa, even though many of such nations lack basic shipment facilities.

"An investment in cotton farming in these nations will no doubt be risky, but can pay big dividend. It will help us enjoy some leverage in global clothing market," said a leading textile miller.

Based on the fact-finding missions, the foreign ministry early this month asked the agriculture ministry to prepare a guildeline for overseas investment in farming sector, the official said.

In a letter to the agriculture ministry, the fact-finders said local entrepreneurs could also invest in African continent's livestock, fisheries, forestry and food and fruit processing sectors.

"We have emphasised the need for urgent adoption of a guideline by the agriculture ministry and the Bangladesh Bank to pave the way for investment in Africa by end of this year," he said.

"Especially, the existing foreign exchange guidelines of the Bangladesh Bank will have to be changed for local investors so that they can remit some dollars abroad," he said.