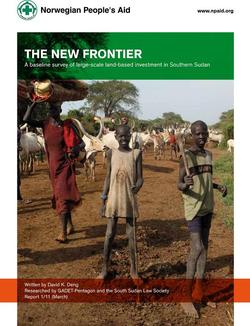 Four months before South Sudan becomes an independant nation nine percent of the country has been targeted by investors, a Norwegian People's Aid report reveals.

The report, The New Frontier, A baseline survey of large-scale investment in Southern-Sudan, is part of a baseline survey of large-scale land-based investment in Southern Sudan prepared for Norwegian People’s Aid (NPA). It presents data on 28 foreign and domestic investments planned or underway across the ten states of Southern Sudan. In just four years, between the start of 2007 and the end of 2010, foreign interests sought or acquired a total of 2.64 million hectares of land (26,400 km2) in the agriculture, forestry and biofuel sectors alone. That is a larger land area than the entire country of Rwanda.

If one adds domestic investments, some of which date back to the pre-war period, and investments in tourism and conservation, the figure rises to 5.74 million hectares (57,400 km2), or nine percent of Southern Sudan’s total land area. While in theory, this influx of investment could provide development opportunities for rural communities, without the appropriate procedures in place there is a danger that it will serve to undermine livelihoods. Below are a series of recommendations that may help the Government of Southern Sudan (GoSS), its international partners, civil society, companies, investors, and rural communities in Southern Sudan to address the risks and opportunities of largescale land investments moving forward: 1. Adopt a presumption in favor of disclosure for all documents associated with large-scale land-based investments;

2. Develop clear jurisdictional roles for public institutions at all levels, including an appropriate balance between central oversight and state-level flexibility, and providing a role for the legislative branch in approving large-scale land allocations;

3. Consider establishing a graduated land ceiling in which the authorization of successively higher levels of government is required as the size of land allocations increases;

4. Consider a temporary moratorium on all land acquisitions above a certain size in order to allow time for the appropriate procedures to be put in place;

5. Establish a technical committee to review all existing contracts to ensure that they comply with relevant provisions of the 2009 Land Act, the 2009 Local Government Act, and the 2009 Investment Promotion Act;

6. Promote alternative business models that better account for the needs of local populations, such as giving communities an equity stake in the venture or maximizing the links between companies and smallholder producers living on or around the project area;

7. Explore opportunities for constructive engagement with companies that demonstrate a willingness to adhere to regulatory standards and prioritize the development needs of host communities.