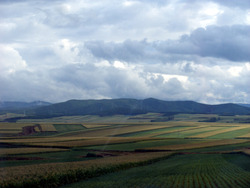 The move is a sign that Chinese agribusinesses, which haven't been as aggressive as metal and mining companies in offshore purchases, are responding to the government's call to move faster on overseas expansion at a time when Beijing is trying to ensure sufficiency in agricultural product supply.

"We're planning 3 million mu of projects this year," Sui told Dow Jones Newswires on the sidelines of the National People's Congress, China's legislature. The mu is a Chinese measurement equal to about 0.0667 hectares.

Beidahuang is planning to purchase agricultural tracts such as edible oil plantations and grain acreage in a wide range of overseas locations, including Brazil, Argentina and the Philippines, Sui said.

"The time is ripe for the country's agricultural companies to embark on a 'go outward strategy'," Han Changfu said, calling it a ripe moment in globalization.

However, it isn't the first time Beidahuang has embarked on a strategy to buy farmland.

Early last year, the company said it closed deals to acquire thousands of hectares in Argentina and Cuba to produce rice, soybeans, wheat, rapeseed and black beans in exchange for Chinese investment in logistics and irrigation.