The Ethiopian region of Gambella is home to Africa’s second-largest mammal migration, with more than a million endangered antelope and other animals moving through its grasslands. But the government has now leased vast tracts to foreign agribusinesses who are planning huge farms on land designated a national park.

Unreported, an environmental tragedy is unfolding in a remote corner of Africa, on the borders of the newly-designated state of South Sudan, that could imperil the second-largest mammal migration on the African continent.

Most of us know about Africa’s largest migration, the millions of wildebeest and their attendant predators who race across the Serengeti plains of east Africa in search of water each year. It is the stuff of countless photographs and hundreds of TV natural history programs. But how many have heard of the second-largest migration? I certainly hadn’t until I stumbled on it last month in the Ethiopian region of Gambella.

As we drove into the bush, the track ahead was alive with large animals. From the far distance they looked like cattle, but it soon became clear they were antelope. As we drew closer, their numbers grew, and they began running. I could see a dense column stretching in all directions. They numbered many thousands, with warthogs in among them, darting through the tall wet grass between a series of ponds and heading toward the Baro River, a tributary of the Nile. 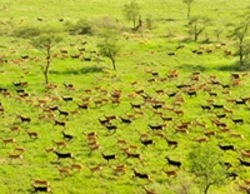 But as the antelope ran I saw, not far away on the horizon, bulldozers and plumes of smoke. Someone else wanted this rich grassland and its water. This bush would soon be transformed — and the future of the great migration in grave doubt.

My guides said the antelope were white-eared kob. Along with the Nile lechwe, another endangered antelope, and the giant shoebill stork, they were the main reason for the creation back in 1974 of the Gambella National Park. The 5,000-square-kilometer park occupies much of Gambella, which is a thinly-populated appendix to the far southwestern corner of Ethiopia.

Geographically and ethnically, the swampy lowlands of Gambella look as if they should be in the neighboring new state of South Sudan, which was formed in January when Sudan was formally divided in two. Gambella’s tall, jet-black skinned Anuak and Nuer tribes are very different from the lighter-skinned peoples of highland Ethiopia. And the vicissitudes of war in Sudan and pogroms in Gambella have seen a constant flow of refugees across the border.

South Sudan is where most of the white-eared kob I saw came from, traveling across the open woodland bush at the end of the dry season in search of Gambella’s open water and wetlands. More than a million of them are estimated to come this way each year, along with a scattering of elephants and giraffes.

But the park that is supposed to protect them is little more than a mark on the map. Two years ago, the Ethiopian ministry of agriculture declared that, whatever its wildlife credentials, the park had “a huge agricultural investment potential.” And now the ministry is seeking to realize that potential through a series of major leases to foreign agribusinesses. Some Two years ago, Ethiopia’s agriculture ministry declared that Gambella National Park had ‘huge investment potential.’ 400,000 hectares, an area 80 times the size of Manhattan, much of it within the 1974 boundary of the park, has been promised so far.

Drive west from Gambella town, the capital of the region, and for most of the two hours it takes to reach Nyininyang near the Sudanese border, you are in the concession of the Indian firm Karuturi Global Limited. Take the road south and the bush suddenly gives way to the vast compound of the other large investor, Saudi oil billionaire Sheik Mohammed Hussein Ali Al Amoudi.

Both concessions are being developed at a breakneck pace with heavy machinery everywhere, clearing forests, draining swamps, and installing irrigation systems. Bush along the roads is burned and, as the dry season ended in late February, smoke plumes dotted the horizon.

Al Ahmoudi’s company, Saudi Star, is constructing a 30-kilometer canal from an old unused state reservoir to irrigate tens of thousands of hectares of rice paddy. But so far the lead actor is Karuturi. The Indian company is the world’s largest grower of roses, claiming 10 percent of the global market. But when we met in Karuturi’s compound by the road an hour west of Gambella town at Iliya, its local project director, Karmjeet Singh Sekhon, resplendent in turban and long twirling moustache, told me the world rose market was now saturated. So Karuturi is moving into other products. And that is bad news for the white-eared kob and much else. 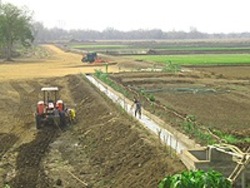 Until recently, there were no roads around Iliya, except the main dirt road west. But the Karuturi concession will soon have 600 kilometers of roads. Within a couple of years, Sekhon expects to have 100,000 hectares under cultivation, with another 200,000 hectares awaiting the go-ahead. Every square meter of bush has been surveyed. His 15 huge John Deere tractors are ploughing 500 hectares a day. “This May we will plant 35,000 hectares of rice, 10,000 hectares of maize, and 10,000 hectares of sorghum,” he told me. Some 20,000 hectares of oil palm and sugar cane will be added soon. This is land clearance on a gigantic scale.

“The soil is excellent,” he said. “It’s virgin land. You can grow anything here. We have no land like this in India. There you are lucky to get 1 percent of organic matter in the soil. Here it is more than 5 percent. We don’t need fertilizer or herbicides.”

Within five years, Sekhon expects to have 50,000 people living within the concession area, working its fields and operating processing mills in three townships. But locals expect most of the jobs to go to highlanders, which they contend routinely happens when businesses come into this region.

There is also growing concern about what is happening to the land. One former ranger at the park told me that Karuturi’s engineers were draining the large Duma swamp 30 kilometers south of the highway and deep inside the Gambella National Park. It is one of the last refuges of the endangered Nile lechwe. And there is the kob migration, which appears to run right through Karuturi’s concession.

I asked Sekhon about the wildlife. Yes, he said, the animals on his land were a “problem.” What about the park? On my map all the land for the 60-kilometer stretch from Baro River in the north to the Gilo River in the What is happening in Gambella is probably just the start for this forgotten corner of Africa. south is part of the national park. At least part of that is on the concession. But he said he knew of no rules that prevented Karuturi from cultivating its concession.

He may be right. It turns out that the park, though marked on maps, has never been formally gazetted. In any case, according to Cherie Enawgaw of the Ethiopian Wildlife Conservation Authority, a government agency, the park may have a handful of rangers but it has “no management plan and no clear indicated boundary.”

What angers Ethiopian environmentalists is that alternative economic uses such as tourism have not been explored. Sanne van Aarst of the Horn of Africa Regional Environment Centre at Addis Ababa University says Gambella has the same potential as the Serengeti and Maasai Mara tourist “hotpots” in Kenya and Tanzania.

Instead, the government has asked the conservation authority to “re-demarcate” the park’s boundaries. There are three options, according to Enawgaw. Each involves moving the park boundaries south and west by several tens of kilometers to make way for the new concessions. But his own maps of sightings of wildlife, produced to help with the demarcation, show that the plan will allow migration paths to be blocked and “wildlife core areas” ploughed up. 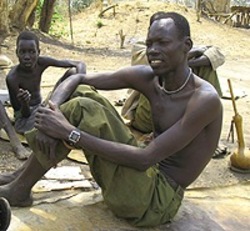 “After the farm came, the animals here disappeared,” says Omot Ochan, one of the local Anuak people. (Photo by Fred Pearce)

Many of the local Anuak people, who farm small areas and hunt in the park, are not happy. I talked to a small group that had refused to move from their village right next to the Saudi Star canal and a road that ran right through their old fields.

“We used to hunt with dogs, but after the farm came the animals here disappeared,” said Omot Ochan, sitting by an open fire on an old waterbuck skin and eating corn from a bowl. “Two years ago they began chopping down the forest and the bees went away. We used to sell honey. Now we only have fish.”

He insisted the company had no right to be there. “Everything for two days’ walk from here is ours,” he said. But nobody is listening. Another truck rumbled past his straw hut, shattering the silence of the bush and creating a cloud of dust. After it had gone, I noticed a large, dead stork in the road.

Park rangers sporadically chase Anuak hunters through the swamp grasses, which can grow up to three meters high. On the road to Nyininyang, I spotted a small gang with dogs, rifles and a couple of chestnut-colored kob slung over their shoulders. Elsewhere, we drove through dense smoke and flames that darted across the road, set by hunters trying to corral their prey.

Back in Gambella town in the evening, as power gave out in the old government hotel, I spoke to a park official. He took note of my report on the hunters. He would send his people out in the morning to check if they were still there. But on the subject of the land grabbers — the real threat to wildlife in the park — he could only shrug his shoulders. It wasn’t his business.

And what is happening in Gambella is probably just the start for this forgotten corner of Africa. Across the border, the emerging government of the soon-to-be official nation of South Sudan is entertaining would-be agricultural investors in its capital, Juba. As in Gambella, the land of South Sudan is fertile, well watered and, by modern standards, hugely under-populated. It is ripe for land grab.

Environmentalists fear that the crown jewel of the upper basin of the White Nile could be under threat — the vast swampland known as the Sudd. Investors are eyeing its water to irrigate huge plantations, says Jane Madgwick, the head of Wetlands International, a Dutch-based NGO that wants a global campaign to resist the move.

In recent decades, few outsiders have visited these areas. They have become almost mythical gardens of Eden, surrounded by civil war. But, now that peace has broken out in southern Sudan, the economic dividend may be wholesale ecological destruction.