Caught in the food pirates’ trap 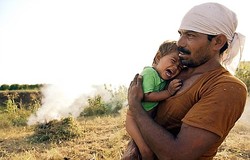 Egypt paid the price, so will we if we ignore the Mahatma’s prescription: production by the masses, not for the masses

The unexpected has happened. Rising food prices and high unemployment have triggered an unprecedented uprising in the Arab world. The fire that began from Tunisia had quickly spread across the desert sands. Egypt, Jordan, Yemen, Sudan and Algeria were faced with a political turmoil. (Egypt has already got rid of its autocrat of 30 years – Hosni Mubarak.)

Unlike the 2008 global food crisis, when 37 countries faced food riots, ousting the Haiti president in the process, spiralling fuel and food prices, especially since September 2010, have been more piercing this time resulting in a strong political tsunami. It all began when Russia, faced with extended drought and widespread wildfires, brought in an export ban till the next year’s wheat harvest, thereby propelling global prices to an unreasonable hike.

Deadly food riots were witnessed in September in Mozambique, killing at least seven people. According to news reports, anger was then building up in Pakistan, Egypt and Serbia over rising prices. In the first week of January, Algeria faced food riots. A few days later, Tunisia sounded the first bugle, ousting its president, and Egypt followed.

As early as in September, Financial Times had reported that wheat futures had taken advantage, and that wheat prices internationally had gone up by 70 percent since January 2010. This happened at a time when there was neither shortfall in production nor any appreciable rise in demand. Egypt, which imports nearly 50 percent of its food requirement, was hit badly when Russia decided to ban wheat exports. Many believe that the Switzerland-based food major Glencore actually forced the Russian government, which had enough wheat reserves, to impose a ban on exports thereby sparking a killing in the futures market.

The social and political unrest that has swept the Arab hinterland is a pointer to a grave crisis ahead. Although Dominique Strauss-Kahn, the head of the International Monetary Fund (IMF) agrees that the rising food and fuel prices in recent months are the major factors behind the massive anti-government protests, he suggests more of the same prescription: “As tensions between countries increase, we could see rising protectionism – of trade and of finance.”

Not drawing any lesson from the debacle of the dominant economic model of growth, business leaders from 17 private companies announced at the World Economic Forum at Davos in the last week of January the launch of a global initiative -- New Vision for Agriculture -- that sets ambitious targets for increasing food production by 20 percent, decreasing greenhouse gas emissions per ton by 20 percent, and reducing rural poverty by 20 percent every decade.

All such initiatives are, of course, backed by the USAID, the main driving force for promoting an industrial takeover of global agriculture. “We are witnessing an unparalleled opportunity right now for innovative, large-scale private sector partnerships to achieve significant impact on global hunger and nutrition,” USAID Administrator Rajiv Shah said at Davos. “USAID is committed to creating new public-private partnerships in Feed the Future focus countries to advance their national investment plans.”

Well, this shouldn’t come as a surprise. Every global crisis provides an opportunity for business. Multinational giants are quick to grab it. In the days to come, I am sure political leadership across the world, with USAID backing, will welcome the initiative not realising that it is the industrial farming model that has created the global food crisis in first instance -- soil health devastated, excessive mining of groundwater has dried aquifers and chemical pesticides have contaminated the food chain.

Green Revolution has already run out of steam, leaving behind a trail of misery and terrible human suffering. Over the years, an unjust world trade has pushed farmers out of agriculture. In the past 30 years or so, including the years of World Trade Organization, 105 of the 149 third world countries have already become completely dependent on food imports. With food prices manipulated through commodity trading and the entire food chain gradually slipping into the hands of a handful of agribusiness giants, the North will soon emerge as the world’s bread basket. The South is being reduced to a begging bowl.

How is this related to Indian agriculture? Well, let me begin by the latest pronouncements first. Economist Raghuram Rajan, a professor of finance at the Chicago Booth School of Business, and an honorary economic advisor to the prime minister, said the other day: “Thinking that India will remain a country where more than 60 percent of people will remain in agriculture is just a pipe dream. The people dependent on agriculture should be brought down to five percent over years.” This is in tune with what prime minister Manmohan Singh has been asking for a number of years now. At least 70 percent of farmers need to be moved out of agriculture.

Read this in consonance with what planning commission depty chairman Montek Singh Ahluwalia says. He has invited Omani firms to farm in India for producing crops that can be exported. At a time when food prices have hit the roof, any measure to limit domestic production should raise concerns. Undeterred, a few weeks ago, Ahluwalia also went a step ahead. He supported the FICCI and CII demand for doing away with APMC laws for horticultural crops. In other words, with fruits, vegetables and grains (wheat and rice were already taken off the APMC Act through an amendment in 2005) no longer required to be brought to mandis, the procurement system is all set for a breakdown.

It doesn’t stop here. Not only the planning commission, economists, scientists and bureaucrats are now clamouring for free markets – commodity exchange, future trading and food retail – as the way to turn farming economically viable. Coupled with land rental policies that have promoted a surge in land acquisitions, setting up of special economic zones, and by encouraging contract farming and commodity trading, India is now getting ready to hand over agriculture to private companies.

Farmers have therefore become a burden on the society, and the government is in a raging hurry to offload the burden. This is being facilitated by tailoring domestic laws on seeds, fertilisers, pesticides, mandis, biodiversity, biotechnology, water and land acquisition to the needs of the industry. Let us be very clear: second Green Revolution has no place for farmers.

What is worrying is that instead of drawing any lesson from the debacle of the first Green Revolution, the government is on a fast track to usher in the second Green Revolution, which will only compound the existing agrarian crisis. This is being backed by an Indo-US Initiative in Agriculture Research, Education and Marketing (KIA), an agreement signed with the Bush administration in 2005, and which is expected to be renewed with Obama Administration. India is committed to privatisation of agriculture and vertical integration of farming to promote “farm-to-fork” model, wherein farmers are not required.

This reminds me of what the World Bank had forewarned way back in 1996. By the end of 2020, the Bank’s estimate was that 40 crore people – close to double the combined population of UK, France and Germany – would be migrating from the rural to the urban areas in India alone.

Prime minister Manmohan Singh has already laid the ground rules for a population shift. The biggest environmental displacement the world will witness will therefore be in agriculture. Ironically, it is barely 44 years after Mrs Indira Gandhi launched Wheat Revolution (which later was re-christened as Green Revolution) that pulled India out of the hunger trap that the country is getting ready to return to the days of ‘ship-to-mouth’ existence when food came directly from the ships into the hungry mouths.

A high growth trajectory and rising incomes do not provide any security from social unrest. Let us not forget Egypt attained 5.6 percent rate of growth in 2010 and has average income levels of $5,000 and yet faced political turmoil when food prices went out of reach. For any country, whether rich or poor, food self-sufficiency remains the hallmark of national sovereignty. Mahatma Gandhi had rightly said that what we need is a production system by the masses and not for the masses.

I thought Manmohan Singh would heed the warning that was sounded by Jawaharlal Nehru just five years after India became a republic. In his August 15 address to the nation, Nehru had said: “It is very humiliating for any country to import food. So everything else can wait, but not agriculture.” With limited option of absorbing the displaced rural population, the socio-economic and even the political fallout from the deliberate destruction of the farming base, is too difficult to fathom. It defies all plausible raesons to find India dismantling the strong foundations of self-sufficiency and resulting food security.

Simultaneous to major economies, including India, removing all the protectionist measures to allow free trade in agriculture, rich countries have already moved in to grab fertile land in the developing world. These ‘food pirates’ come with bag full of foreign direct investment and are moving swiftly where land is available, investing in crops that can be shipped back home. Already an area which exceeds the size of France has either been leased out or out-rightly purchased. Much of this is in Africa, Latin America and Asia.

We are, therefore, entering a phase when even if you have money food will not be available in the international markets. This is primarily the reason why companies from rich countries have invested in developing countries to meet the domestic requirement back home. Add to it the fact that food is now being branded as a hot commodity, the futures market will continue to exploit. Unregulated commodity trading has already multiplied from a mere $0.77 trillion in 2002 to over $7 trillion in 2007.

While people die from hunger or storm into the cities expressing anger against the political leadership (not knowing that the real culprit is the Wall Street), the investment banks and hedge funds quietly make a killing from speculation. With the G-20, IMF/World Bank turning a blind eye to curb food speculation, Hosni Mubarak may not be the last political head to roll. If only Egypt had invested in attaining food self-sufficiency, history probably wouldn’t have witnessed the march of the million.