The dilemma of land grabs and the implications for sustainability. 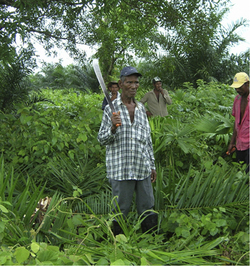 The dilemma of land grabs and the implications for sustainability.

The first issue of Development 54 starts the one year debate on sustainability by looking at the dilemma of the current global land grabs in Africa, Asia and Latin America. It engages academics and researchers of the Land Research Action Network and of the University of Utrecht in a hot debate on land speculation today.

The journal issue tackles land, commodity and food speculation. It explores the implications for an equitable and sustainable development and looks at how to ensure that any benefits from foreign land development are passed on to local people.

Documents the wide range of different drivers of the global land grab, showing that the process is much more extensive and faster than usually reported in the media

Looks at the gender impacts of global land grabs in Africa

Contexts and Procedures for Farmland Acquisitions in Africa: What outcomes for local people?

Examines the problem of inadequate compensation for local people in Africa

Describes the land grabs of the current agrarian reforms in China

Discusses how to prevent land grabs in Nigeria

Analyzes the struggles over land in Costa Rica


Whose Lands? Whose Resources?

Describes the impact of land grab deals in Cambodia and Laos


Monocropping for Agrofuels: The case of Brazil


‘Through their Eyes’ – The photo exhibition

Books and Reports on Land

Window on the World

Window on the World

Lists contacts and short bionotes of all the contributors

Reclaiming Land and Livelihoods in Colombia: A photo essay