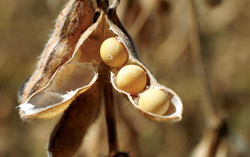 Chongqing Grain and its partners will invest an aggregate RMB 16.25 billion ($2.47 billion) in the facility, which will include a three million mu (2,000.01 square kilometers) plantation area, a 1.5 million ton-capacity warehouse and a soybean processing factory, according to Chongqing Economic Times.

The report did not disclose a construction timetable, and nobody at Chongqing Grain was available for comment when contacted by Interfax on March 1.


State-owned Chinese Chongqing Grain Group allocated $ 879 million to produce and industrialize soybean in Brazil. Investment should be done in partnership with producers in Bahia. The announcement was made by Huang Qifan, mayor of Chongqing (2090 km southwest of Beijing), which is connected to state government. Little known in Brazil, perhaps Chongqing is the most populous city in the world, with about 32 million inhabitants.

In an interview with state TV channel CCTV, the country’s most important, Huang said that it is the largest Chinese investment abroad for the production of soybean oil. The allocation of resources was approved in August by the company, with funding from the Development Bank of China. “We will have more than 70% of the shares, and the Brazilians will get the rest. So we will have 200 000 hectares of available land, which means that we can raise more than 130 000 hectares of soybeans per year, “said Huang.

“They like to sell soybeans to us. We ship from Brazil to China more than 4 million tons per year, “said the mayor, including the purchase of soybeans in the surrounding area. According to Huang, China must now import 40 million tons annually. “Our business will help balance the market,” he said. In April, when the Chongqing revealed plans to invest in Brazil, the forecast was $ 300 million and 100 thousand hectares, but had the option of expanding to 200,000 hectares in the second phase.

The offensive in soy is part of a wave of Chinese investments in Brazil and the world as strategic commodities for the second economy in the world, like oil and iron ore.

Despite statements by Huang, the Chinese plan to invest directly in land was not officially informed. According to information from the government of Bahia, the Chinese state’s goal is not to buy soybean producing areas, but to deploy an industry for production of edible oil. According to Eduardo Salles, Secretary of State for Agriculture, the group hinted at a meeting held in July in Salvador, which will seek partnerships with local producers, especially because there are no large tracts of land available for purchase and Brazilian law restricting the purchase of them by foreigners.

The enterprise must be installed in the western state, where the soybean acreage reached 1.06 million hectares. Salles said that the finalization of the investment “is still ongoing,” indefinitely. He said he only has information on investments of $ 300 million and knows nothing about the amount advertised now.