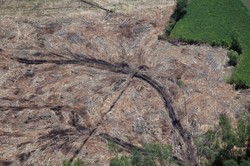 Qatar will secure 70% food security in the country by exploiting the latest technology to make its barren land arable.

Roughly as large as Connecticut, Qatar relies almost exclusively on imports for food with only 10% of the country’s edibles produced within its own borders. Unlike other Gulf countries that are usurping African land to expand their agricultural capacity, Qatar intends to transform its own barren land into an agricultural powerhouse. According to Gulf in the Media, the National Food Security Program (NFSP) committee has established a five-stage plan to first identify and then overcome challenges to achieving food independence.

Food prices rise in tandem with oil prices, since the cost of shipping food necessarily increases. As a result, Qatar’s imported food doesn’t come cheap. To counter this problem, the country established their NFSP in 2008.

The 17-member committee will identify challenges, conduct surveys, and analyze data related to exploiting the most modern agricultural methods to render land between Doha and Al Khor arable.

Although the team expects to receive some resistance from middlemen in the current food supply chain, NFSP and its Chairman, Mohamed bin Fahad Al Attiyah, welcome input and investments from the private sector.

Widespread agricultural production in a country with few freshwater resources and an unforgiving desert climate is no easy task. Nonetheless, Qatar will invest huge sums of money on research and developing a progressive information technology hub in order to secure lower food prices.

Their four major foci will be:

“We are well on our way to making reliance on food imports a thing of the past,” Al Attiyah told the paper.