We all have the duty to resist land grabbing! 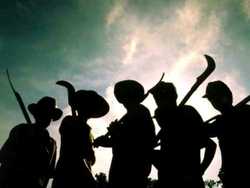 A brief report about the World Social Forum in Dakar

Undoubtedly, land grabbing was one of the main axis of mobilization during the last WSF.   Various social movements, faith-based groups, development and human rights organizations organized a series of events revolving on this issue. One of the most relevant was jointly convened by the West African Network of Peasants and Agricultural Producers (ROPPA) and La Via Campesina with the support of FIAN at the Agricultural Faire FIARA focusing particularly on strategies for action. Djibo Bagna, ROPPA's chairperson,  highlighted in his opening speech the importance of awareness raising and alerting not only ROPPA’s members about the serious impacts of land grabbing, but the society at large due to the threat that  this development poses to all. He called for joint actions at all levels and different fields, including information, research, media work and bringing the cases to court. Moreover, affected peasants by different forms of land grabbing from Mozambique, Democratic Republic of Congo and Indonesia told the audience about the human rights abuses they have been facing due to the activities of national and multinational companies.

Particularly impressive was the testimony of a peasant delegation from the Office de Niger, one of the most affected regions in Mali by land grabbing. They described how the preparatory works for putting into production large-scale land grants like the construction of an irrigation canal have already led to the destruction of the houses and the subsistence plots of approx. 60 families.  Additionally, access to the Niger River by the local peasants has been limited, affecting particularly the women whose livelihoods depend from the river. More importantly, the Malian peasant delegation shared with WSF participants at various events how they have been organizing at the grassroots and national level to face this threat.

Similarly, Catholic development organizations held a three day seminar with participants from 25 countries from Africa, Asia, the Americas and Europe, including FIAN representatives. In its final declaration, they recommended to the Catholic Church to denounce land contracts that violate human rights as illegal and illegitimate; and to strengthen linkages and deepen trust with local communities through closer consultations and stand by these communities in times of challenges. Similar conclusions were reached in the land grabbing event organized by the African Network on the Right to Food, the Ecumenical Advocacy Alliance, the Fellowship of Christian Councils and Churches of West Africa with the support of ICCO and Bread for the World.

Following the suggestion of the French NGO to build on the joint positioning on land grabbing developed by CSO during the last session of the Committee on World Food Security in Rome in October 2010, La Via Campesina and ROPPA, with the support of FIAN, Friends of the Earth International, CCFD – Terre Solidaire and Peuples Solidaires, took leadership to facilitate an assembly of convergence of all groups interested in launching a strong appeal against land grabbing in Dakar. The appeal should serve as vehicle to forge a broad alliance and mobilization which supports all the communities and peoples organizations defending themselves from land grabbing on the ground. The appeal calls for the immediate stop of land grabbing and the restitution of the lands taken away from the local communities. Moreover, it addresses several demands to the national governments, as well as to international organization. The appeal will be opened for endorsement to organizations until the 31st of March. Later on, it will be possible for individuals to sign as well.   As Christian Roqueirol, French peasant representing La Via Campesina, clearly put it: “We all have the duty to resist land grabbing and to support the communities fighting for their dignity!”

More at: http://www.fian.org/
FIAN - that is FoodFirst Information and Action Network.
FIAN is an international human rights organization that has advocated for the realization of the right to food for 25 years. FIAN consists of national sections and individual members in 60 countries around the world. FIAN is a not-for-profit organization without any religious or political affiliation and has consultative status to the United Nations.