UAE looking to Turkey for investing in food security 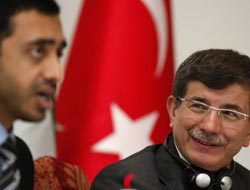 
The UAE will look to invest in farmland in Turkey as rising prices raise the urgency of food security, says Sultan al Mansouri, the Minister of Economy.

Recent natural catastrophes from Australia to Argentina had taken officials by surprise and pushed up prices of some commodities, he said.

"The issue of the food crisis we see all over the world puts much more focus in areas of co-operation," he said during the UAE-Turkey Joint Economic Committee meeting.

"Turkey has great potential in the agricultural sector and we would like the Turkish side to provide us with opportunities to invest in the sector as this is one of our priorities."

Agriculture is still one of the most valuable sectors of the Turkish economy, with about half of the country's land area devoted to farming. Turkey is an important exporter of fruit, wheat and cotton. The prices of the last two commodities have surged in recent months as bad harvests in key exporting nations put pressures on supply.

As a country that imports about 85 per cent of its food requirements, the UAE is taking action to safeguard its future needs by building strategic food reserves.

Turkey was "very open" to agricultural investment from the UAE, said Mr Shamsheik.

Opportunities were especially plentiful in the south-east of the country, where there were 1.8 million hectares of land, he said.


The two sides also discussed the possibility of linking Turkey to the planned GCC railway project. Running from Kuwait City to Muscat, the estimated 2,117km-long project will carry passengers and freight across the six GCC states.

"This railway project will cover the whole of the GCC and will eventually reach Turkey due to the lines that are connected to Turkey and further to Europe," said Mr al Mansouri.

Nasser Ahmed Khalifa al Suwaidi, the chairman of Union Railway, was among the officials at the meeting. The developer and operator of the proposed national railway will begin tendering civil engineering contracts next month.

Mr Shamsheik said he was delighted at the prospect of connecting Turkey with the GCC through the project and said Turkish companies had expressed an interest in bidding for construction contracts.

Turkey was in talks with the GCC over a free-trade agreement between the two sides, said Mr Shamsheik.