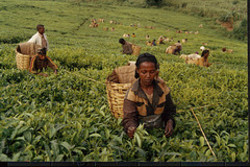 Local elected officials in southern and western Ethiopia are bitterly opposing the selling away of farm land by the Woyanne ruling junta to foreign investors. Some of the local officials who take a stand are receiving threats and being summarily dismissed by Meles Zenawi’s puppets who are installed as regional administrators. One of these officials is Ato Tamiru Ambelo, chairman of the Gumare Kebele in Gambella, western Ethiopia.

Ato Tamiru and people in his kebele have been protesting the leasing of a large tract of land to an Indian company to be used for tea farming. even though there is a severe food shortage in the country. Read the threats and dismissal letters here. Also read Timiru Ambello’s letter here. It is a testimony by a local official of how the Woyanne junta is destroying the country’s irreplaceable forest.