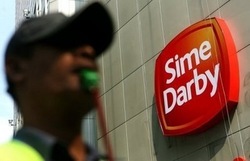 A security guard stands next to the headquarters of palm oil giant Sime Darby in Kuala Lumpur. The company, which is the world's largest listed palm oil producer, says it will make its first foray into Africa, with plans to establish plantations in Liberia in April. (Photo: AFP/File/AFP)


"This foray is most significant as it allows us to explore opportunities for further growth and development in other emerging markets and regions," said Franki Anthony Dass, executive vice-president of Sime Darby Plantation.


Sime Darby, which already has palm oil plantations in Malaysia and Indonesia, will invest 70 million ringgit ($23 million) in the project, Dass added in a statement.


With question marks hanging over the conduct of other Malaysian palm oil firms, the company vowed to uphold sustainable practices.


"Sime Darby Plantation is a responsible player in the industry, committed to sustainable development and our venture into Africa allows us to introduce our best practices in a region where we are starting fresh," said Dass.


Palm oil, which is used extensively as biofuel and for making processed foods and toiletries, has been vilified by environmentalists for causing deforestation and threatening species such as orangutans and rhinos.


IOI was accused by an environmental group last year for unsustainable plantation activities in West Kalimantan in Indonesia, but the firm has vehemently denied the claims.


Indonesia and Malaysia are the world's top two palm oil exporters and account for 85 percent of global production.


Sime Darby is Malaysia's second-largest company by value, with a market capitalisation of 47 billion ringgit. It owns more than 5,000 square kilometres (1,930 square miles) of palm oil plantations in Malaysia and Indonesia.