Cottoning on to foreign investors 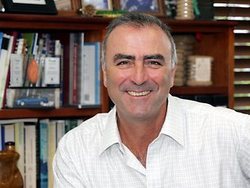 
RICHARD Haire is relaxed about the current influx of foreign money into Australian agribusiness.

And he says it's not just because these days he's employed by Olam, a Singapore-listed rural commodities trading and logistics group.

"Capital is mobile, but the assets are not,'' is how Haire sums up his attitude to those who worry that overseas interests are increasingly buying up the Australian farm, or at least the processing and marketing operations across a range of agribusinesses.

The 20-year veteran of the once ASX-listed Queensland Cotton, which Olam bought in 2007 for nearly $170 million, says what Australian farmers need in volatile and currently high priced international commodity markets are secondary and tertiary businesses in the sector with strong balance sheets.
Start of sidebar. Skip to end of sidebar.

At the same time, Haire says there has been a general reluctance on the part of Australian investors to put money into agribusinesses, often seen as too volatile and cyclical.

"The Australian appetite for investment in the sector just isn't (generally speaking) there.

"Agribusinesses in Australia, more often than not, are valued at a discount to their net tangible assets. International businesses, however, tend to trade at a premium.''

Given his long stint in the agribusiness sector, Haire knows it will always be volatile, even violently cyclical at times.

But he concedes it is hard to refute the argument that is driving much current foreign interest in Australian agricultural  that the rise of China and India, and a potential "doubling of the world population by 2050'', will provide agribusiness groups "with supply and control of product'' with strong medium to long term growth.

He's now served more than his three years, and is not looking to move on.

Haire says Olam, which has leveraged off its Queensland Cotton platform to expand its Australian grain trading, and in 2009 added to its significant international nut supply business by buying a swathe of almond orchards from the collapsed Timbercorp for $288 million, has given him a great deal of autonomy in his enlarged role as head of its Australian and New Zealand businesses.

And he also heads Olam's investment committee, meaning he is intimately involved in the group's global expansion plans.

"I'm finding I've got more than enough satisfying professional challenges,'' he says, "and am learning a great deal.''

Olam processes and supplies some 20 rural products across 64 countries and combines plantations, farming and forestry with an extensive international supply chain network.

It undertakes value-adding secondary processing of part of its product range and also has downstream manufacturing operations.

Haire says that since its takeover of Queensland Cotton, the Australian and New Zealand operation has grown to be one of the top four or five agribusinesses in Australasia.

Haire firmly believes a major factor in long term agribusiness success is to use the cycles to your advantage and to buy when things are crook and be prepared to sell out in the good times.

The continuing influx of global players into the Australian sector, which has traditionally had a high foreign presence, Haire sees as a plus for Australian farmers.

"I don't think it matters'', says Haire, who began his career with a US giant that has long operated in Australia, Cargill.

"They bring their balance sheets, they bring expertise and they bring markets that otherwise may not be available to local players.''

And along with the projected growth in demand, Haire  who is currently president of the Queensland chapter of the Australian Institute of Company Directors  believes the off-shore players have accurately projected generally good times ahead.

"Ten years ago, agribusiness was part of the old economy,'' he says. "Today, we are even seeing bright talented young people keen to get into it.

"I think we are on the threshold of an exciting era.''