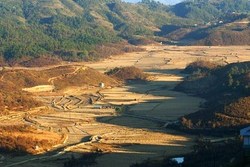 Construction at the Rufiji Basin, Tanzania

THE government will not pay compensation to villagers who encroached at Lower Rufiji Valley, taking advantage of the proposed irrigation farming project with the Korean firm which is in the offing.

“We caution the villagers not to invade the project area for the sake of compensation. No money has been allocated for that purpose,” he said.

RUBADA DG said a number of villagers will be relocated later to pave way for modern farming venture which is part of the project. He added that the relocation modalities would be communicated when the project takes off.

About ten villages will benefit from the project to be undertaken by the government through RUBADA and the Korean Rural Community Corporation (KRC), which will implement the initial five-year irrigation farming project.

On Tuesday, the government and South Korea signed the Memorandum of Understanding (MoU) for feasibility study of the Comprehensive Agriculture Development Project in Lower Rufiji area of the Rufiji River Basin.

The agreement aims at promoting the agricultural sector in production, processing and marketing of agricultural products as well as irrigation development and water management, including flood control.

The project is a result of the visit by the Prime Minister, Mr Mizengo Pinda to Korea in 2009 where KRC asked for about 100,000 hectares for agricultural investment. The project will also involve training of at least 1000 young progressive farmers where the training centre will be constructed at Ikwiriri centre.

Other areas to benefit with the project, according to the framework, include the rural village development where rural roads of villages near the project will be developed.