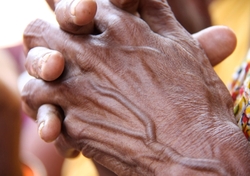 Land grabbing in massive proportions is happening all over the world, threatening not only the survival of small farms but the very food sovereignty of nations. Prospective foreign buyers and speculators are justifying the land rush with the continuing global food crisis, rising energy demand and even climate change, and the need therefore for the efficiency of large-scale food and agricultural production. In exchange, land reform programs are being subverted worldwide while host countries give up chances for self-sufficiency as well as economic democracy to determine the sustainable use of their land and natural resources.

The World Bank has only recently said its piece on the issue. While seemingly recognising the horrendous scope of land grabs, the World Bank is actually saying that large-scale foreign investments in farmlands and the direct participation of transnational corporations and financial oligarchs in agricultural production are acceptable as long as they are done under the pretence of social responsibility. The World Bank has proposed guidelines towards this end.

Meanwhile, the CFS has proposed that the World Bank Guidelines and the FAO Voluntary Guidelines be developed in an inclusive process and that the two should be consistent. In the 36th session of the Committee on World Food Security (CFS) on October 11-14 and 16, however, civil society groups have called on the FAO not to endorse the World Bank’s guidelines and to strengthen its own voluntary guidelines. Headway has been achieved in terms of stopping the looming threats of global land grabs, but much remains to be done especially by social movements.

Global land grabs have been an observable phenomenon since 2008. Existing research literature has focused on the extent and speed at which they are happening and the repercussions on several aspects of agrarian development. Researches have focused on Africa since the continent hosts the largest number and area of land grabs. This paper is a contribution to the articulation of the issue. It places the phenomenon in the context of the current global economic crisis to trace the roots and impetus of global land grabs. It focuses on some initial cases in Asia to show the peculiarity of the issue in the Asian context and project what is in store for the region. Finally, this paper uses the principles and programmes of food sovereignty to analyze the implications of global land grabs on the aspirations of farming and marginalized communities.