Soros's Adecoagro plans public offering in US, may sell shares to Qatar 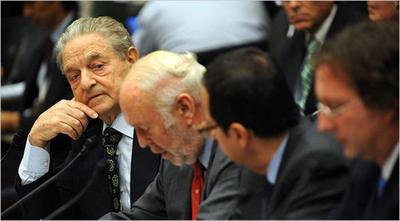 The company plans to use $230 million of the proceeds to build a sugar-cane processing plant in Brazil and may spend about $145 million on “the acquisition of farmland and capital expenditures required in the expansion of our farming business.”

By Lucia Kassai and Rodrigo Orihuela

Adecoagro SA, a farmland venture in South America that’s backed by billionaire George Soros, plans to raise as much as $429 million in an initial public offering in the U.S. as food prices surge.

As much as 21.4 million new and 7.14 million existing shares will be offered for $13 to $15 each, the Luxembourg-based company said today in a U.S. Securities and Exchange Commission filing. The company’s main shareholders include Pampas Humedas LLC, an affiliate of Soros’s Soros Fund Management LLC, which owns about 34 percent and will reduce its stake to about 21 percent after the offering.

Adecoagro, which has farmland in Brazil, Argentina and Uruguay, is seeking to sell shares as commodities prices rally amid growing demand for food and as severe weather from South America to Russia pares supplies. Corn and soybean futures rose to their highest since July 2008 in Chicago today, while arabica-coffee futures touched the highest since June 1997 yesterday in New York.

The company said in the filing it plans to use $230 million of the proceeds to build a sugar-cane processing plant in Brazil and may spend about $145 million on “the acquisition of farmland and capital expenditures required in the expansion of our farming business.”

The new sugar mill in Ivinhema city, Brazil, will process 6.3 million tons of cane by 2017, more than doubling Adecoagro’s capacity to 11.5 million tons a year. The company said it may also use cash and more debt to fund the construction of the Ivinhema mill.

As part of the offering, a subsidiary of Qatar’s Doha-based sovereign fund, which already owns 6.5 percent of Adecoagro, may buy as much as $100 million of the stock. The IPO is scheduled to price on Jan. 27, according to data compiled by Bloomberg.